I swear I really intend to post about stuff other than my baby’s weekly and monthly updates. It’s just that just when I think I have figured a schedule out for my baby and that now she will stick to it, she laughs at my plans or cries her lungs out and after that, I reaaaaally don’t have the energy to blog.

So for now, at least I’m blogging about her week and this blog isn’t inactive anymore.

Here’s what happened in Week 18 of Baby Bear’s life.

Doesn’t have a single tooth, but manages to bite me.

I thought I had quite a bit of time before my baby would start to bite me during nursing sessions, but turns out that 18 weeks old with no teeth is just about the right time to start doing so. I am not looking forward to when she has teeth. 😕

I was iffy about introducing a pacifier, but then when her wails after bathtime didn’t allow me to even put her clothes on, I decided to at least try using one. Luckily it worked and she stayed calm throughout the process and nursed to sleep. Just like everything else with this child (or maybe it’s the same with all children; I wouldn’t know) as soon as I thought I’d figured a way out, she decided that it was time to mix things up because suddenly from this week on, the pacifier doesn’t work either.

So I’m left with two choices:
1. Put on a diaper as soon as I bring her out and then feed her. Change her clothes once she’s full (and most likely asleep) and risk waking her up and start another session of banshee-like wails that’ll probably bring the neighbours to our house asking us if we were mistreating our child, OR
2. Let her cry it out and dress her up quickly and then feed her so once she’s calm there’s no risk of her crying again. Okay, lesser risk of that happening.

I’ve been following #2 the last few days since she’s going to cry anyway. But she weaned herself off the pacifier, so I should be happy about that, right? Right. 🙄

This week was her first Pongal – a harvest festival celebrated in Tamil Nadu (Southern India). So I dressed her up in her Paavadai and we went to my mother’s house to celebrate. I even put a bindi on her forehead, but it didn’t stay on for long. The celebration consisted of eating yummy food cooked by my mother and grandmother. Enough said.

That same day, she also completed 4 months. So we bought 4 pastries and had a little birthday celebration there as well. 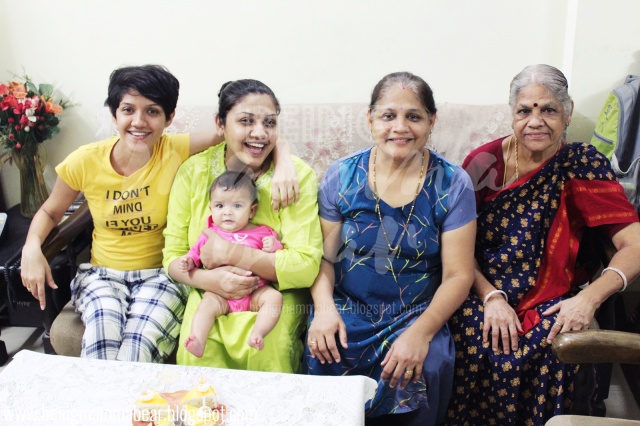 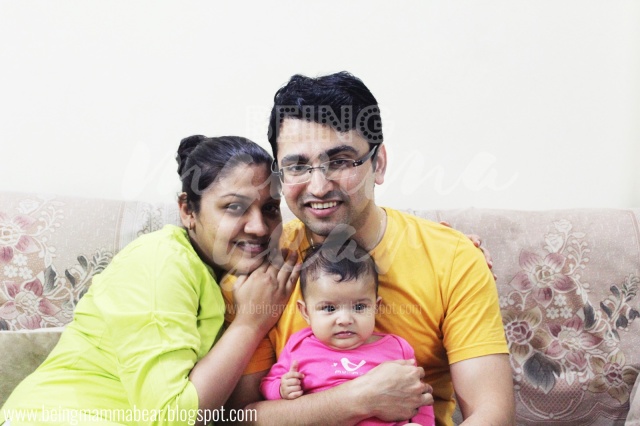 Over the week she has laughed so many times and it doesn’t get old, it only gets cuter. And the best part is that she laughs at everything I do or say!! I could go ‘aaaaah’ and she’d laugh. Look, this is me asking her if she’d like to have some milk?

Over the week, she has mastered the art of rolling over and does that in one try most times. She can roll over to both sides but she is yet to figure out how to roll back. She also does mini push-ups and OMG! It’s so cute when a tiny person does that!! 😍

And like all babies do, she looks absolutely adorable when she does that early in the morning. 😊

During the weekend, my husband suggested we go for a long walk and we could also buy some clothes for me. Now usually, I wear her. But since I would have to try clothes on, I didn’t want to have to take the carrier off. So I urged him to try it once even though he was ready to carry her in his arms. But since we were going for a long walk, I insisted on the carrier.

He did wear her and she loved it!

She was okay at first but when she saw that he stood in one place she gave him the look you can see in the picture below. I made him stand because I wanted to take a good picture outdoors. Once he started moving around, she was happy. 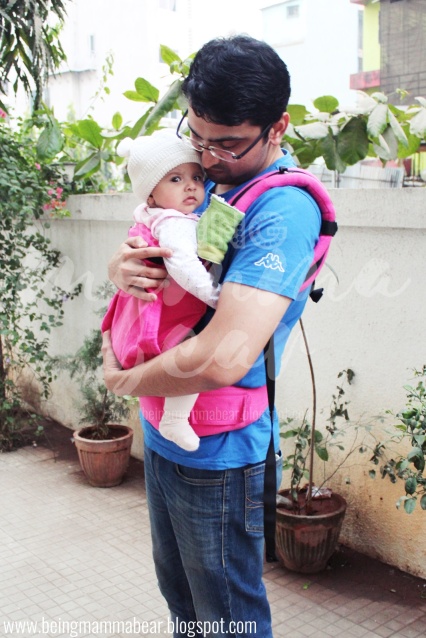 What’s interesting is that she was awake the entire time and looking around.

Watched videos of herself and enjoyed them

One weekday morning, she was getting a little cranky. She wasn’t hungry or sleepy, so I turned the computer on and put quite a few of her videos in a playlist (right from the day she was born) and we both watched them together. She watched intently and didn’t make a sound so I assume she had a good time. 😁

That’s all for this week. I’ll be back soon with a post that’s hopefully not a weekly or monthly update. 😛

Follow Being Mamma Bear on WordPress.com
Join 1,526 other followers