I’m so excited to be writing the second post about the week that was (first, here) and this week, I took notes. I know that’s crazy, but I’ve never admitted to being ‘normal’, have I?

Anyway, since the post I wrote the previous week was the first one of its kind on this blog, I had a lot of material to share. But then I realised that if I’m going to do this every week, I need to know what to write about. And what better way to generate content than to take notes? 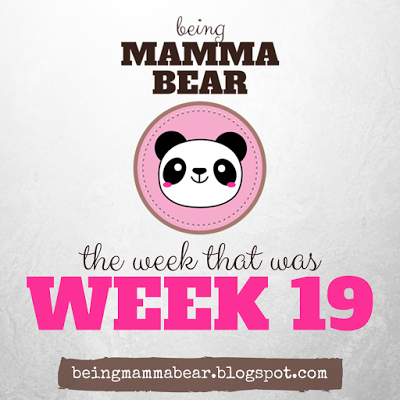 This past week has been great. Aside from the fact that I was unable to sleep on time thanks to the loud music playing in the hutments behind our building for 3 nights this week (Tuesday, Friday & Saturday), I managed to wake up and sleep at a reasonable hour. I feel that’s a major factor contributing to my sanity and efficiency.

You see, for the past few weeks, I had been unable to sleep before 3 or 4 AM. There’s no reason as such, I would just be wide awake. And if I woke up earlier than noon, I would feel so sleepy around 3ish in the afternoon that it almost felt like I was drugged. So if I didn’t nap, I couldn’t function for the rest of the day because there’d be a throbbing pain in my temple and if I did, I wouldn’t be able to sleep until 4 AM. Get what I mean? It was like a vicious cycle.

So this week I decided that I’ll break the cycle and relied on a small cup of coffee every alternate day that allowed me to stay fresh throughout the day. Yay!

As for the mood swings, I realised that my bad day(s) last week were not because of my mood because I really haven’t had another one yet. So that only goes to show that people were actually being annoying and I wasn’t ‘over-reacting’ or anything.

In fact, I was even fun. At least I thought so.

My husband called me one afternoon, during his lunch break just to check up on how I was doing. Within a few seconds, he said he’d call me back in some time. I thought it was weird. Why would you call someone if you didn’t have the time to talk? Turns out, he as with a colleague and that colleage was alone and needed company on their after-lunch walk around their office building.

“Didn’t you know that before you called me? I paused Anathema‘s Untouchable to answer your call,” I told him.
“I’ll call you back in 10 minutes,” he said.
“But why did you call if you didn’t have time to talk in the first place?”
“What’s wrong with you? I said I’ll call,” he laughed.
“Nothing! I just paused a good song to answer your call only to have you tell me that you’d call me back. It’s not fair.”
“10 minutes. I’ll call you. I pomise,” he said.
“It’s 1:58 now. If you don’t call me before 2:08, I’ll call your landline every 30 minutes and interrupt you. Just letting you know,” I laughed.
“Don’t be that girl,” he told me.
“Don’t make me,” I said, still laughing. “I love you.”

Thanks to the coffee, I’ve had a good, productive week. I hadn’t used my planner since after the second week of February and when I thought about how I hadn’t used a single page in March or April, it made me sad. It was such a waste of a great planner. So on Tuesday, I decided to decorate the April monthly spread and use the last week. Something’s better than nothing, right? 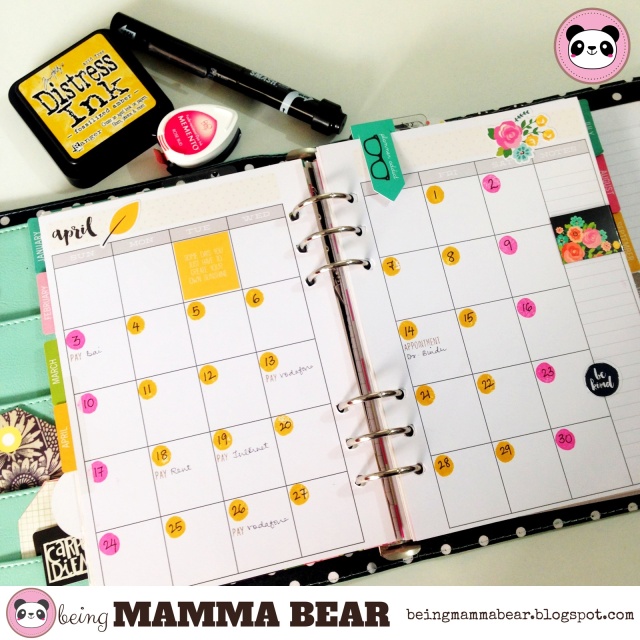 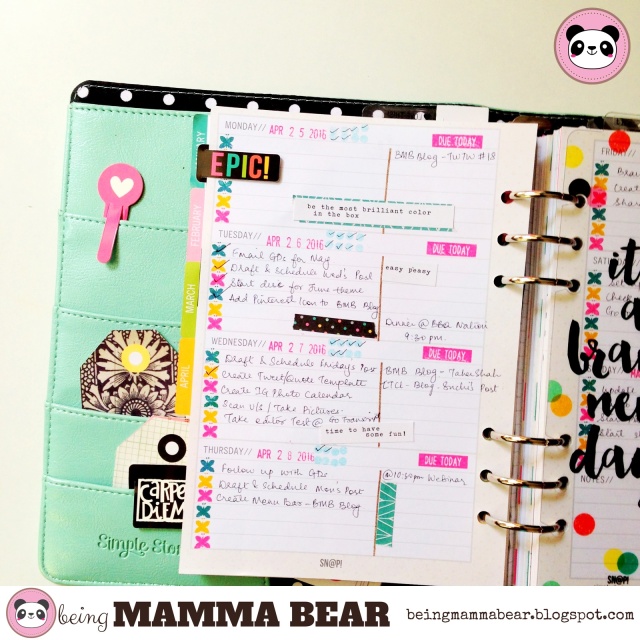 And it worked! I made a list of things I wanted to do during the week (and did most of them), I made a blog schedule and stuck to it – posted on Monday, Wednesday and Friday (and that’s the schedule for every week, going forward), I even attended a webinar by Melyssa Griffin, made some new blog and twitter friends. I even made a design template to turn my tweets in graphics so I can share them on Instagram. I’ve only shared one so far, but I have three colour options that I’ll use alternatively, so I’ll give you a preview of the next two too. Here’s what they look like… 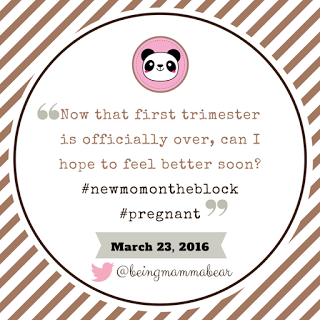 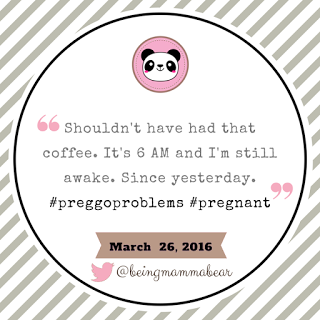 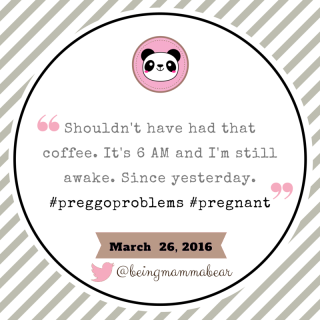 I also added that cute little Menu Bar on top. I realise that there’s some error in the code and I’m working on rectifying that.

I’m also back on the #FMSPhotoaDay (created by @fatmumslim)  bandwagon (on my personal account, though.) I started playing along in January 2012 and have been participating on and off. I started again at the beginning of this year too, and like everything else, it stopped. 😦

And the best part of the weekend – the LIVE Stand-up comedy show the husband and I went to watch. It was a first for us, so we had a super time. Kunal Rao and Sapan Verma of the East India Comedy fame were performing and we have seen enough of their videos to know that watching them live would be a good decision, and it so was! We loved it. I realised we don’t watch enough live shows! So before the baby gets here, I want to watch more of stand-up, plays and maybe even a concert 😉

I’ve had the best week in a long, long time. As I already mentioned, I was super productive this week (the coffee may have helped, but I’ll still call it a win.) Healthwise, I feel much better than last week especially beacuse the morning sickenss affected me only two days out of seven this week, so again, a win. Hoping that it’s one (or no) day(s) this week, meaning that my morning sickness phase is FINALLY OVER! Whattay relief!

My Relationship with Food

Well, this is embarrassng. Since I’m now able to eat without the fear of throwing up (thankyouverymuch Doxinate), I may have overeaten more than once this week. The first time, we were at Barbeque Nation with my parents and sister as a late birthday celebration. We wanted to go there once we announced the pregnancy, but given that I couldn’t hold food down, we realised it would be a bad idea to go to a place with unlimited food. Bu now it seemed like a good idea and I went to little too far with the hogging. It all stayed in, but I didn’t feel too good afterwards.

So I decided that I would get baby familairised with all my favourite songs so I can use them when the baby gets cranky. So this week, I listened to:

Next week, Artists with B. 🙂

What Baby Bear has been up to

Well, I should be able to feel kicks by now but all I got was a slight rumble inside my belly Saturday afternoon while I was stretched on the bed, browsing Instagram. This, only after I complained about not being able to feel anything on Twitter.

If I’d known complaining would have gotten me results, I would have done it way back at 16 weeks 😛 Anyway, I have a feeling it’s going to happen soon. So I’ll just wait for it (Like I could do anything else.)

Here’s how big the bump is this week 🙂 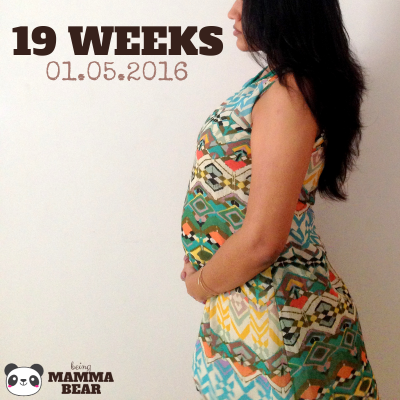 That’s all I have for now. I’ll be back with another post on Wednesday. Have a great week! 🙂

Follow Being Mamma Bear on WordPress.com
Join 1,527 other subscribers