Well, aren’t we a few days late!? I usually post this on Monday and have another post up by Wednesday. But it’s Thursday today and I’m still working on the week that was. I think I jinxed my streak of productivity after I bragged about it last week.

To make up for this delay, I will have to post three posts, back to back this week: today, tomorrow and the day after so that I get Sunday as a breather before I go back to my M-W-F schedule. I don’t know if I can, but I surely will try. 🙂

The weather here, in Mumbai, was so bad this past week that I was sweating out of places I didn’t know I could sweat. There have been instances when I’ve entered the kitchen fresh after a bath only to be drenched in sweat minutes later just because I stood next to the stove while I made the 10 odd chapatis for the night. What makes it worse is that we don’t have an air conditioner. And it actually didn’t matter until last week because even with the warmth in April, it was pretty comfortable inside the house. But May seems to have plans to make me feel uncomfortable no matter what I’m dressed in.

Maybe that’s the reason I haven’t been feeling up to sitting in an office chair and typing on the computer when the fan, even though running at full speed, seems to be miles away from me. I could sit on my bed (in another room), but with my growing belly, stretching my feet and placing the laptop on my lap is less than ideal and not just because my bump covers a little bit of the lower part of the screen. My back hurts too. Actually, it does even when I’m sitting in my office chair with a cushion behind me for support.

You won’t believe how excited I was when I heard the pitter-patter of raindrops Monday night (May 9), because in Mumbai, the rains have been known to begin as early as mid-May instead of mid-June. Imagine my disappointment when, even after lighting and thunder, it stopped raining 10 minutes later. And that just meant that in the days to follow (read: yesterday and the day before) it would be hotter and it so was.

So it was no surprise that I felt extraordinarily thirsty. It was so bad that ice-cold water and even iced coffee with extra ice cubes didn’t help. I realised I needed to drink something that was more watery in its consistency but still not as bland as water, you know what I mean? So I looked up how to make iced-tea and home and man did it taste good! 😀

Here is how I made it:

And then, a day later, I even added a few mint leaves and poured it into a glass that was more appropriate for the beverage. Certainly better than the beer mug I first had it in. 😉

I think it also needs mention that I had a serious case of ‘Pregnancy Brains’ when I was making this because I held a steel vessel that I’d just taken off the stove and burnt three of my fingers because I totally forgot that it was hot. But the iced tea made it totally worth it!!

Oh, this is the best part. I am extremely happy to report that I’ve had no morning sickness AT ALL this week. In fact, as of today – Thursday, May 12, 2016, I have been morning-sickness-free for exactly two weeks. I cannot begin to describe how relieved I feel because I have been waiting for this to go away since Week 13 when my first trimester officially ended. It happened six weeks too late, but better late than never, right?

Also, I’ve been feeling really good about eating this week. In fact, I even had some cravings. After the aforementioned Iced Tea craving (or should I say, quench?), I really wanted to eat Pasta but I didn’t have the patience to make the sauce because that would mean waiting for over an hour for the dish to be ready. So I used this quick recipe that I saw on Pinterest over a year ago. I’ve made this several times after that, so even though I don’t have the link to the recipe, I do remember how to make it.

Details are in the caption of the embedded photo.

//platform.instagram.com/en_US/embeds.js
The original recipe also said to add bread crumbs to this but that’s something I always forget. That and the squeezing the lemon bit. Thankfully, this was all lemony because this time I didn’t forget. 🙂

I still was a little bit productive during the first few days of the week. And during that time, I decorated the Monthly spread in my Simple Stories’ Carpe Diem Robin’s Egg Blue Planner. Here’s how the entire spread looks. I added lots of stickers, some Washi Tape and even some Bits and Pieces from the same collection. I love how colourful this page looks. I still don’t have the number stickers so I used a solid circle stamp to add the colourful background to the dates and then wrote the numbers by hand.

Continuing my super productive streak, I decorated my planner for May. I did the monthly spread and ALL the weekly pages! Can you believe it? 😱😋 This is how I did the month of May in my #SimpleStories #CarpeDiemPlanner. #bmb_planner #planneraddict #plannergirl #plannercommunity #carpediem #planner #plannerlife
A photo posted by Mamma Bear (@beingmammabear) on May 2, 2016 at 6:19am PDT

Here’s a closer look at the pages. 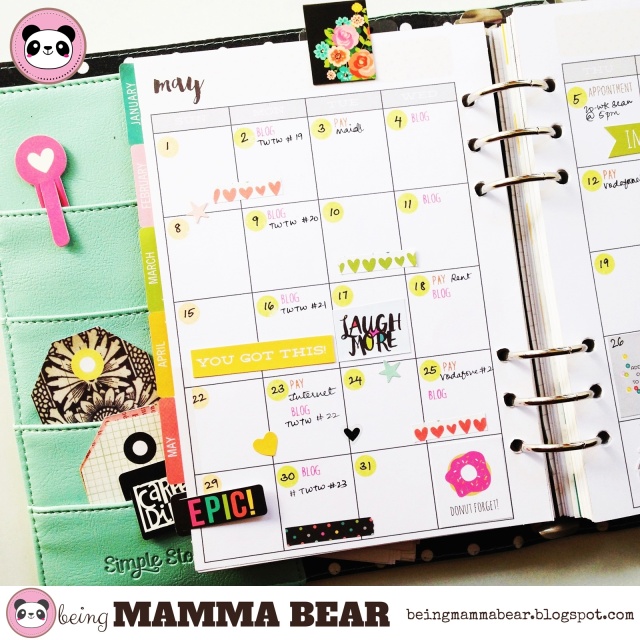 I also decorated ALL the weekly pages for the entire month; at least the stamping bit so that I don’t have to get my stamps and inks out every week. I’ll show you more pictures next week.

On Sunday, the husband and I also went to brunch. There’s this English Cafe near our house called Olde Bailey’s and they have this amazing English Breakfast on the menu. We decided to try that (I chose the vegetarian breakfast) and since it was almost noon by the time we had it, I thought it was more brunch than breakfast. 🙂

#Coffee always tastes so much better when you have to do nothing to make it 😇 Had this delicious cuppa with brunch today ♥️☕️ . . . #bmb_preggodiaries #mammalovescoffee #coffeelover #latte
A photo posted by Mamma Bear (@beingmammabear) on May 8, 2016 at 2:29am PDT

He, on the other hand, only had a cold chicken sandwich. 😛

Well, Week 20’s playlist was pretty short. There aren’t many artists with ‘B’ or I don’t know about them. Here’s what I listened to this week.

I’m pretty excited for this current week because, well, Coldplay 😀
And I just realised I forgot to add Bon Jovi to this 😦

What Baby Bear has been up to

I had my 20-week mid-pregnancy scan this week and it was so awesome to see an actual human inside. Especially after the baby looked like a Shrimp at the first scan and almost like an alien in the second.

I also finally felt the baby move and it wasn’t just one rare coincidence or a rumble inside my belly that I could’ve mistaken as the baby moving. It was real, so real. It’s actually a funny story.

I was having a popsicle Saturday afternoon and when I bit on a huge chunk of ice, I felt something. This reminded me of what the doctor told me during my 13-Week anomaly scan.

The doctor wanted a certain angle to measure the length of the baby’s nasal bone but she couldn’t get the right view. We tried for half an hour but it didn’t happen. So I had to come back again the next day. It was then that she told me that if I ate something or drank something really cold, the baby would move because it would ‘wake’ the baby up. And she was right. This past Saturday, I felt something instantly. More on this in the next blog post. 🙂

This week my belly looks more like a bump than just a lot of flab like it did for most of the first few weeks.

See what I mean? At 16 weeks, just four weeks ago, it looked more flabby. Now, it’s all round and bump-y. I love it 😀 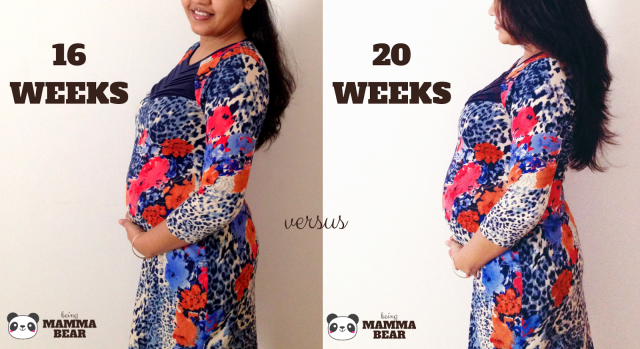 That’s all I have for today. I’ll try to post again tomorrow.
How was your week?