We’ve all heard that pregnancy is a glorious time because our bodies are creating a miracle and it’s true. Our body creates a whole new person and if that’s not a miracle, I don’t know what is. And then there’s the lie that pregnant women have a wonderful glow –  a BIG FAT LIE!
I’m not sure how it is for most people, so I might be mistaken when I say this:

Being pregnant is not fun.

I just completed 20 weeks TODAY and I’m only recently beginning to feel like myself. In another week or two, I’m pretty sure I’ll begin to enjoy myself too.
*Fingers Crossed*
Phew! It feels so good to get that off my chest.

And I’ll tell you why I’m saying this. I’m the last one among all my married girlfriends to get pregnant. So you’d think I would’ve heard their stories and have some idea about first trimester troubles. But no. Five of my friends had their babies before me, FIVE, and none of them had a horrible first trimester. Except one, but even then all she told me was that she had severe nausea; so much that she lost quite a bit of weight in her first trimester.
So I was mentally prepared to throw up a lot, be tired and not feel good. But I underestimated how tired and crappy I would feel. There were times when I wondered what I had gotten myself into, but then I kept reminding myself that it was just a matter of the first trimester and thankfully, a month of that had already passed by the time I found out. I kept reminding myself that at the end of it all I would have a sweet little baby in my arms (and then I had to remind myself to not think about labour when I was only 5 weeks + 3 days along.)
If only positive thinking would make everything better! Sigh!
I already had a little body pain a few days before we found out. So when we went to the OB, I didn’t think of mentioning it to her because I thought it was just fatigue. But that evening when I started feeling feverish again, we decided to go back to the doctor – this time, our physician. At the onset, I told him that I had just found out that morning that I was pregnant so he could give me medicines accordingly.
He told me I had a viral infection that was in the air at that time because of the sudden change in the weather. Mumbai had suddenly become extra cold in the third week of January this year, so much so that other than not turning the fan on at all, I had to resort to wearing extra layers of clothing once it was past 5 PM and put on socks when I went to bed. 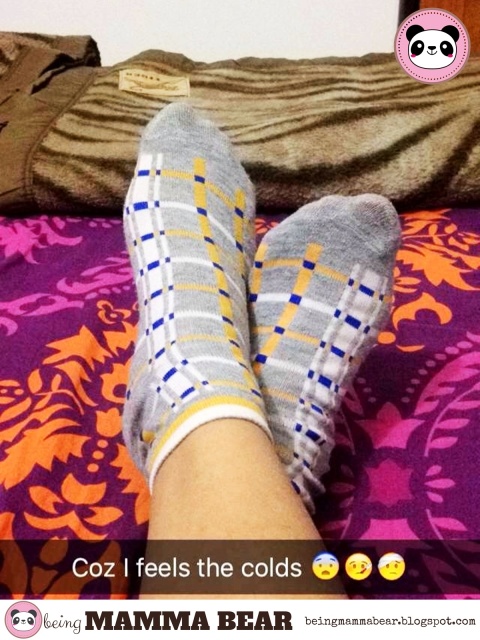 Over the next few days I developed such a horrible dry cough that I had trouble sleeping because I would wake up coughing. I was advised to drink hot water, suck on lozenges, and inhale steam. Apart from hot water, one of the Indian home remedies is to have hot milk with a pinch of turmeric powder in it. Just to make it tastier, I ground two cloves and cardamoms and added them too.

I spent my afternoons and evenings inhaling steam from water mixed with eucalyptus oil.
One night, I coughed till 5 AM and during that time, I had a cup of hot water every hour in the hope that it would make my itchy throat better and it still wouldn’t stop. I moved to the living room and shut the bedroom door so that my husband could sleep peacefully. But when he woke up to the sound of my cough, I started to cry because I wasn’t able to make it stop, even with the medicines and hot water. The crying made me throw up – the first of the many vomit episodes I was about to have.

A day later, I lost my voice. I had coughed so much that my vocal chords decided they had had enough. I would try to speak and there’d be only air coming out of my mouth.

I went to my OB this time and she recommended a syrup and some pregnancy-safe antibiotics. It was only after the first dose of the antibiotic that I was able to sleep through the night for the first time in over a week. But falling asleep was still a task. I realised that if I lay down and didn’t change positions, the cough would stop in a while. I just had to be patient. Four days later, after I had consumed the prescribed dosage, there was still no relief.
I was asked to see a Chest Specialist because it could be an allergic cough. He recommended an inhaler. Not the puff like the one used for asthma, but one that would split a capsule open so I could inhale what was inside. A waste of eighty-five rupees, if you ask me. I could have split open the capsule by hand and inhaled the stuff, but I didn’t want to risk doing it wrong. Fifteen days later, there was still no improvement. In fact, there was no change AT ALL. I was still coughing at all hours of the day and night.
I had had such a cough before and past experience told me that medicines would do nothing to alleviate it. So I gave up, because nothing was helping me anyway. In another couple of weeks (I say this four weeks after the cough had first started) it would go away on its. But this was no normal cough; this was cough while I was also pregnant and it had no intention of making things easier for me.
You see, the day I started my sixth week, the morning sickness started, almost like clockwork. What came along with that was this strong sense of smell that sent my previously ultrasensitive sense of smell to shame.
Every single smell came on so strong that I began to wonder how my cat lived such a miserable life. I mean, they have a very strong sense of smell, and what I could feel was not pleasant. AT ALL. What made it worse was that I found even pleasant scents repulsive.
See, no one tells you this part. They all tell you that you’ll be able to smell things strongly and you take that to mean something like: Oh, I’ll be able to take in the aroma of coffee beans twice as much. OR I love this new perfume now that I can smell it from two streets away.
I’m sorry to break it to you, but that’s not how it works. At least it didn’t in my case.
For me, the bad smells only got worse and somehow, I began to hate the good ones too.
After months of searching for the perfect bathroom freshener, I found one that I liked and one that would last – Airwick’s Lavender scent. Turns out, this scent that I’d loved for the past eight months – the one that made me want to bathe three times a day – was the scent smell that made me retch. So much so that I wanted to throw up every time I went into the bathroom and I wasn’t able to hold back every time.
Perfume made me sick. The smell of food made me sick. The dishwashing liquid annoyed me. Mr. Muscle (that I specifically chose over Lizol) made me want to run away when the maid mopped the floor. Dove soap and shampoo and conditioner made me want to not bathe at all. Thank God it was still cold and I didn’t sweat because there was no way I was going to wear perfume, even a little bit.
So there I was, seven weeks into my pregnancy (three weeks since I found out), and I was tired, sweaty from all the steam inhalation, pale from puking my insides out at least twice a day, weak because I detested anything I ate thanks to the metallic taste in my mouth and wondering, where the f*ck was the glow??
What I didn’t know was that I wouldn’t know till it was mid-April.
Yay, first trimester!!
*sarcasm*

Follow Being Mamma Bear on WordPress.com
Join 1,525 other followers