The next step in prepping for Laddoo’s First Birthday was the decor, and that is something I have found very hard to accomplish in India considering that I love muted colours and minimal prints whereas almost everything you find here is bright and flashy. We had the same issue when we were planning my Baby Shower and I didn’t expect it to be any easier when it came to Laddoo’s Birthday.

With the Baby Shower I managed to make most of what I wanted on my own (you are going to LOVE IT when I actually write about it) because back then, I had waaaay more time. But this time, we had to function smart because there was a baby around who wouldn’t let us work hard.

Having a rainbow background isn’t an original idea, we’d seen it in loads of  pins when we were looking for ideas for decor. And if I’m being honest I really wanted a rainbow that looked like a rainbow instead of the upside down arch we had, but it was more difficult to create than I imagined. So we let that go.

And instead of telling you what I didn’t do, let me share what we actually did do. 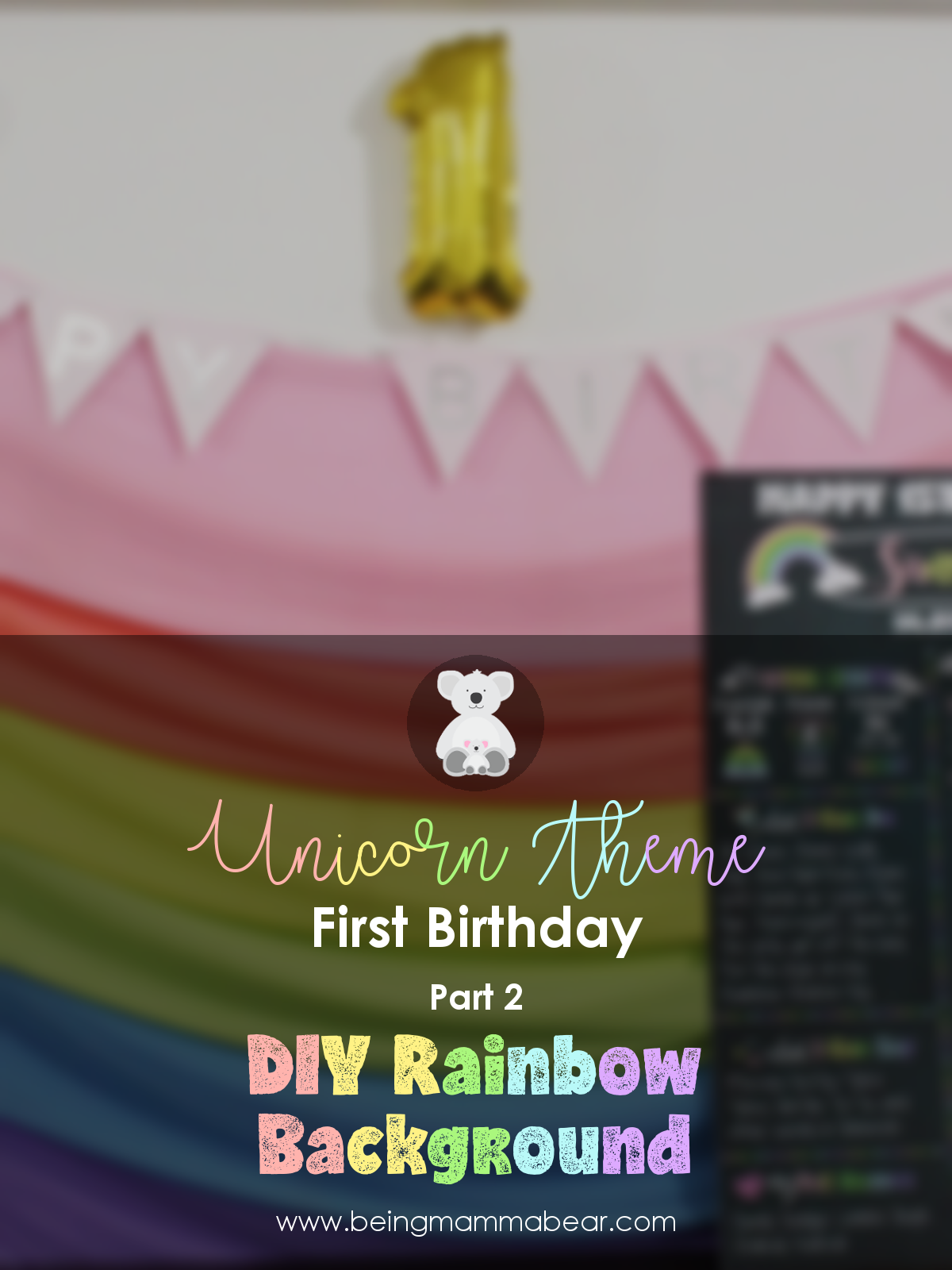 You can use this for any colour scheme and add more colours if you want, but here’s what you will need.

Use as many Georgette (or Chiffon) dupattas as you need in the colours of your choice. We used six (6), you can do this with three (3) or four (4) too. The amazing thing with plain dupattas is that if they aren’t readily available in the colours that you want (very unlikely, but can happen), you can get them dyed to suit your colour scheme. And they don’t cost as much either. Each Dupatta costs around ₹60-80. We had some of the colours already so we only had to buy a few more, but if we had to buy all six colours, this would have still cost us less than ₹500.

You can use any kind of clothespins – wooden or plastic. It doesn’t matter what colour they are because we are going to be smart about this and hide them. You will need 2 pins for each dupatta. We used 12. You can use the ones you already have at home or go buy a new pack; you’ll find one within ₹50.

The reason for this is that you don’t want to ruin your walls. That’s why instead of drilling holes in the wall or using sticky tape (that might result in peeling the paint on the wall) we will use removable adhesive. At the same time this needs to be strong enough to hold the dupatta‘s weight. I recommend Faber Castell Tack-It Removable Adhesive (not sponsored 😜) but you can use any other kind of removable adhesive too though I’m not aware of another brand that makes something similar. Each packet costs ₹75 (or at least it did in 2008 when I bought this 🙈) and being the stationery hoarder I am, I had this at home already.

To make clouds (and to cover up two of the pins 😜) you will need clouds and they can be easily made using white Balloons. You can do with as few as four (4) balloons – 2 on each side – but obviously, you can add more to make nice, big, fluffy clouds. A pack of white balloons costs anywhere between ₹60-80 .

And you will have a fabulous rainbow 🌈

Setting up the whole Rainbow took around 30 minutes, and I loved how colourful it all looked. Once you see the pictures of the cake (post coming next week), you will see that it makes an amazing photo backdrop too. And because none of the attachments are permanent, you can always switch up the colours or reorder the dupattas to suit your needs.

For each layer, I folded the dupatta in half breadthwise before clipping it on. But if I had to do this again, I would leave the bottom layer open so I could get a covered background and there wouldn’t be any white spots in the background.

For a deeper U in each dupatta, adhere the clothespins closer and vice-versa.

We used dupattas of standard length only, but if you have a larger area to cover you can always buy a longer and/or wider piece of fabric.

Easy enough, right? And if you have someone to help you with this, this will take even lesser time, maybe only 15 minutes ir so. Stay tuned for the next instalment where I will share how I made the birthday cakes. 😊