Before anyone takes offence, let me be very clear that before February this year, I was a cloth-diapering dummy too and even though I was a part of a couple of Cloth Diapering (CD) facebook groups, I had no idea about anything. So in an effort to help moms like me, who may have heard of cloth diapers but have no clue beyond that, this post should be a helpful guide. 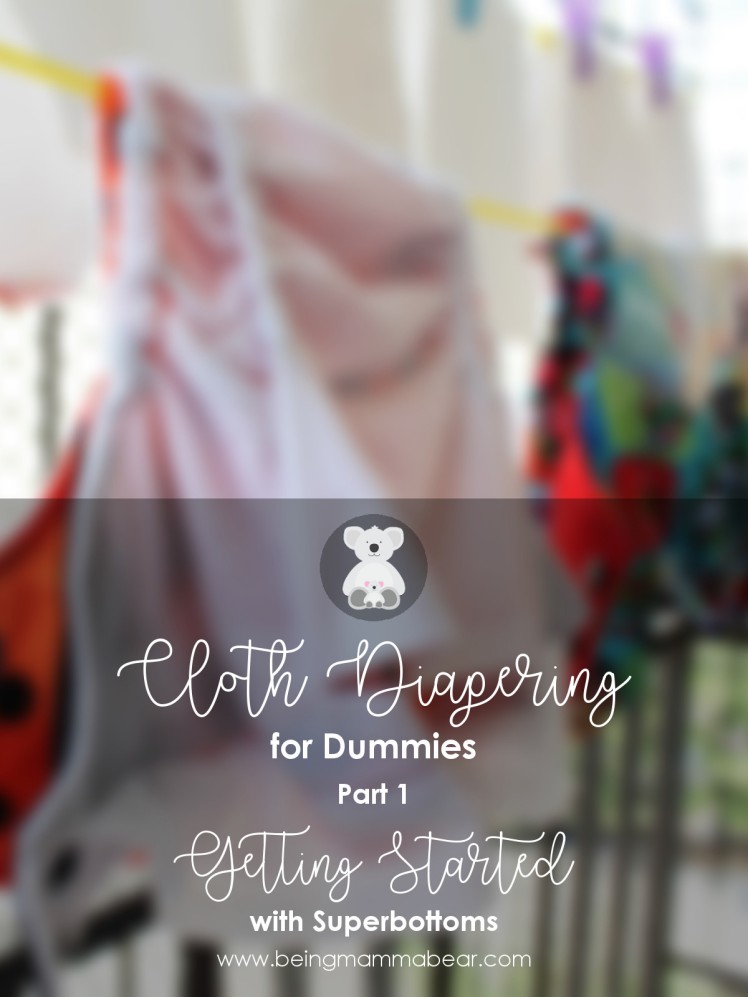 If you don’t use cloth diapers, here’s 8 reasons why you should switch immediately.

No, I am not an expert and no, this post may not be able to answer ALL your questions, but it will help you get started and answer your basic questions about what types of cloth diapers there are, and how to build your stash.

Warning: Given that this is a post about diapers, pee and poop are mentioned quite often. If that grosses you out, close this window immediately. No pictures, though. Obviously.

When Superbottoms first sent me two of their diapers, I opened them up and mixed up their inserts without realising they were different and then I wondered for a whole day where the third diaper was because there were three inserts. Yeah, that was me. I wasn’t kidding when I used the word ‘dummy’ and I was mostly referring to myself. Anyway, self-deprecating humour aside, it was later that I realised that I had been sent two different kinds of diapers and no, I did not realise that on my own.

I’m sure Nayantara must’ve wanted to bang her head on a wall when I told her I was clueless. A simple look at Superbottoms’ website would have answered most of my questions, but  she was kind enough to take me through the types on a video call itself.

I had been sent a Pocket Diaper (Design: Baby Talk) and a Cover Diaper (Design: Superkids). At the time, Laddoo was just about to turn 5 months old and we had only been using disposable diapers and I had been feeling guilty every single day, so I was more than happy to make the switch. Let me tell you more about Pockets & Covers.

I was hesitant about using cloth nappies for my newborn because she peed and pooped very frequently back then (and still does 😜) and given that I was alone with the baby all day, I was worried I’d be changing nappies and clothes, and washing bedding all day and I had no plans of losing my sanity within a few weeks of becoming a mother. But then again did I want chemicals touching my baby’s delicate skin all day? Not if I had a better option.

Then I found out that Cloth Diapers are just as functional as disposable diapers. Every single Superbottoms’ Diaper comes with a waterproof outer cover that makes it leakproof. When I learnt that her clothes, blankets, and other stuff around the house will be safe with CDs, I was immediately intrigued and was more than willing to give it a try.

Each diaper has two parts – the waterproof outer and a soaker. Here are the types of Superbottoms’ diapers available. You can buy them here.

A cover diaper is basically just a waterproof outer ‘cover’ on which you can attach the soaker. Each cover diaper comes with 2 soakers, and each soaker has a dry-feel layer on top which will keep your baby’s bum dry.

The finish of the soakers for Cover Diapers will be different on both sides. The smooth side is the side that has the dry feel layer and that’s the side that’s supposed to come in contact with the baby’s skin.

As the name suggests, these diapers have a pocket that holds the insert/soaker. The pocket is made using a dry-feel fabric which means that even after your baby pees on it, the fabric will stay dry. Under this fabric (inside the pocket) is the soaker which will absorb baby’s pee and depending on whether your baby is a heavy wetter or not, the soaker will last for anywhere between 2-4 hours – same as the soaker(s) for Cover Diapers. 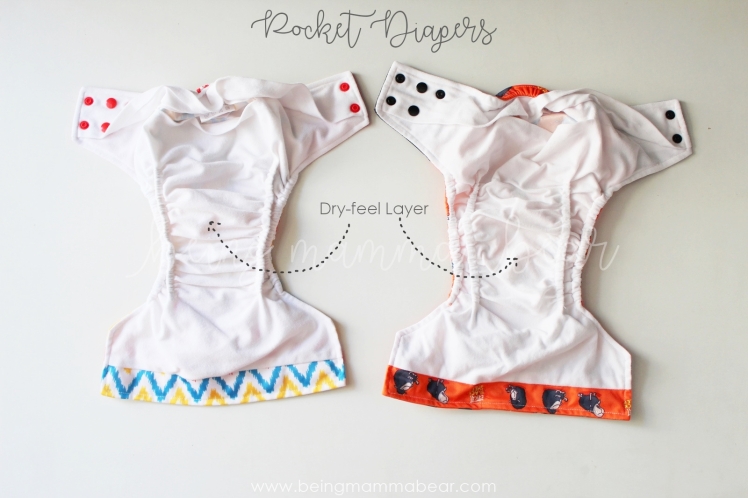 In Pocket Diapers, the Dry-Feel layer is stitched on the outer waterproof cover and one end is left open, creating a pocket. Featured Designs: Ikkat Chevron & Baba Black Sheep.

During those 2-4 hours, if your baby has only peed in the diaper, it need not be changed unless it feels full (you’ll feel that the diaper is wet around baby’s thighs). However, if baby poops, of course, take it off immediately and put on a new one. 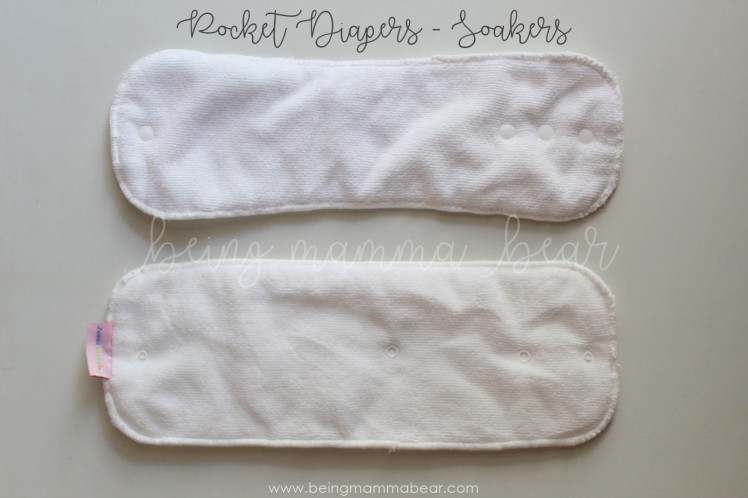 With this diaper, whether your baby pees or poops, you will have to put on a totally fresh diaper. The cover with the pocket cannot be reused without washing.

Superbottoms Plus AIOs (All in One)

This is a more advanced version of the pocket diaper. This comes with one soaker stitched to the outside of the pocket plus one additional soaker that can be inserted inside the pocket. The Superbottoms website says that this diaper can easily last up to 7-8 hours when both soakers are used together but I have used this without leakage overnight – 8 PM to 8 AM. The only difference with this is that it can hold more pee than the pocket or cover diapers. However if the baby poops within hours (or minutes 🙄) of putting these on – has happened soooooo many times – you will have to change the whole diaper because the poop will be on the stitched soaker.

But otherwise, this is great for using during the day and especially in the night. I have used AIO all night only once (I know I should every day) but it was a good experience barring the strong smell of pee I was hit with when I opened the diaper in the morning. It had accumulated for around 12 hours, after all. A disposable diaper doesn’t smell after being on all night because of the fragrances added to it.

If you are just getting started, here are my tips on how I think you should go about it:

0-6 months: This really should be split into 0-3 months and 3-6 months but Laddoo was almost 6 months old when we properly started building our stash, so for lack of experience, I will club this into one category. Had I started with cloth diapers from Day 1, I would need more than 4-6 diapers a day (that’s our current rate) because for the first two months at least, my baby pooped every few hours, multiple times a day. We went through 8-10 disposable diapers, so you can imagine. At the same, I do realise that every baby is different and yours might need fewer or more diapers each day. It’s always a good idea to start with a few (even 2 or 3) and see if it’s something you and your baby are comfortable with (which you will be) and then upscale.

If you are currently pregnant, buy a few (or use this time to build your stash 😜) and start with those once the baby arrives. 2-5 is a fairly comfortable number and isn’t too much. If your baby has crossed the 3 month mark, the frequency of pooping should reduce and poop during sleep should completely stop (at least that’s what happened with us) which means that unless absolutely required, there’s no need to change diapers during the night. Superbottoms Plus All-in-One (AIO) is perfect for use in the night as it is built to last overnight.

6-12 months: This was the time when we switched to ‘Fully Cloth Diapered during the Day.’ As I said earlier, Laddoo was barely 5 months old when we received our first Superbottoms Diapers. For the first month, while I was still getting the hang of it, I used only the two cloth diapers that were initially sent to me. During that time she was Cloth Diapered on alternate days. Some days, if she pooped more often, we exhausted the 3 diapers (2 technically, but the cover came with an additional soaker, right?) within the first half of the day and we had to switch to disposables.

The fact that I could wash and re-use them over and over again made me realise how economical they were (in the long run). But before I invested in more diapers I wanted to be sure if I was willing to hand-wash poop multiple times a day. 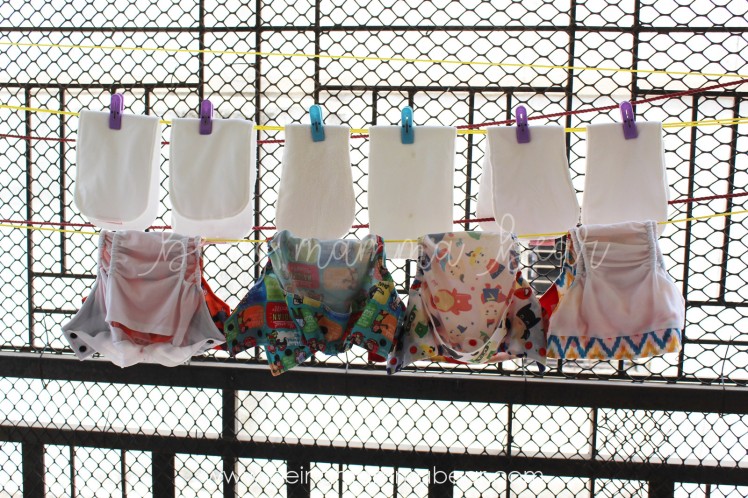 So instead of buying new, more expensive ones, I bought old/used cloth diapers from a friend (yes, this is a thing. More on this later) to test whether I could handle it. Hand-washing poop wasn’t the only thing I was concerned about. If we were to only use cloth diapers, they would have to be washed and dried on a regular basis, so during this time I also established a wash-routine that ensured I had at least 4-5 cloth diapers at the start of any given day.

Once I was sure I could commit myself to this, I decided to expand my stash. By then, (end of March – baby was 6.5 months old then) I was chosen to be Superbottoms’ Blogger Ambassador and they sent me 3 more diapers (2 AIOs, 1 more pocket diaper, and a wet bag) and I ended up buying 4 more – 3 pockets and 1 cover.

As of today my stash has:

Superbottoms’ Pocket Diapers or a Single soaker in a Cover diaper – each lasts for about 2-4, sometimes even 5 hours (when I’m lazy and I forget 🙈) and the used, old diapers that I bought last anywhere between 1-3 hours before I can start to feel wetness around the edges.

On an average, currently at we use anywhere between 4-5 diapers a day (AIOs last longer, remember?) but with 18 diapers, we can safely use up to 6 each day for 3 days (if we aren’t able to wash diapers or they aren’t dry for some reason) before we absolutely have to switch to disposables

If you are looking for benefits then do check out this post. It will definitely make you think about starting your cloth diapering journey, or at least I hope it will.

If you have any questions, feel free to ask me in the comments or get in touch with Superbottoms directly on any of the social media channels mentioned below. They have a very helpful and active social media team that will provide you with the guidance you need.

But before you go, don’t forget to check out Superbottoms on Social Media

21 thoughts on “Cloth Diapering for Dummies | Getting Started”

There was an error retrieving images from Instagram. An attempt will be remade in a few minutes.