It’s official. My child loves The Gruffalo. I read it a total of FOUR times yesterday, and she still wanted more. A day that started with seeing a huge rainbow in the morning and ended with reading one of the classic children’s books, it was the prelude to another milestone day.

As much as Laddoo loves The Gruffalo, oddly enough, she turns away when the mouse first meets the Gruffalo. Her eyes are usually glued to the illustrations on the page and she laughs every time I say, “Silly old ___. Doesn’t he know? There’s no such thing as a Gruffalo.” But then on the page with the full picture of the Gruffalo, she’ll move away from me and the book. During our first reading for the day, she tried to make her hand into a claw when I said, “He has terrible tusks, and terrible claws,” and instantly, it reminded me of Phoebe teaching Joey how to play the guitar: Old lady, bear claw, turkey leg. LOL. 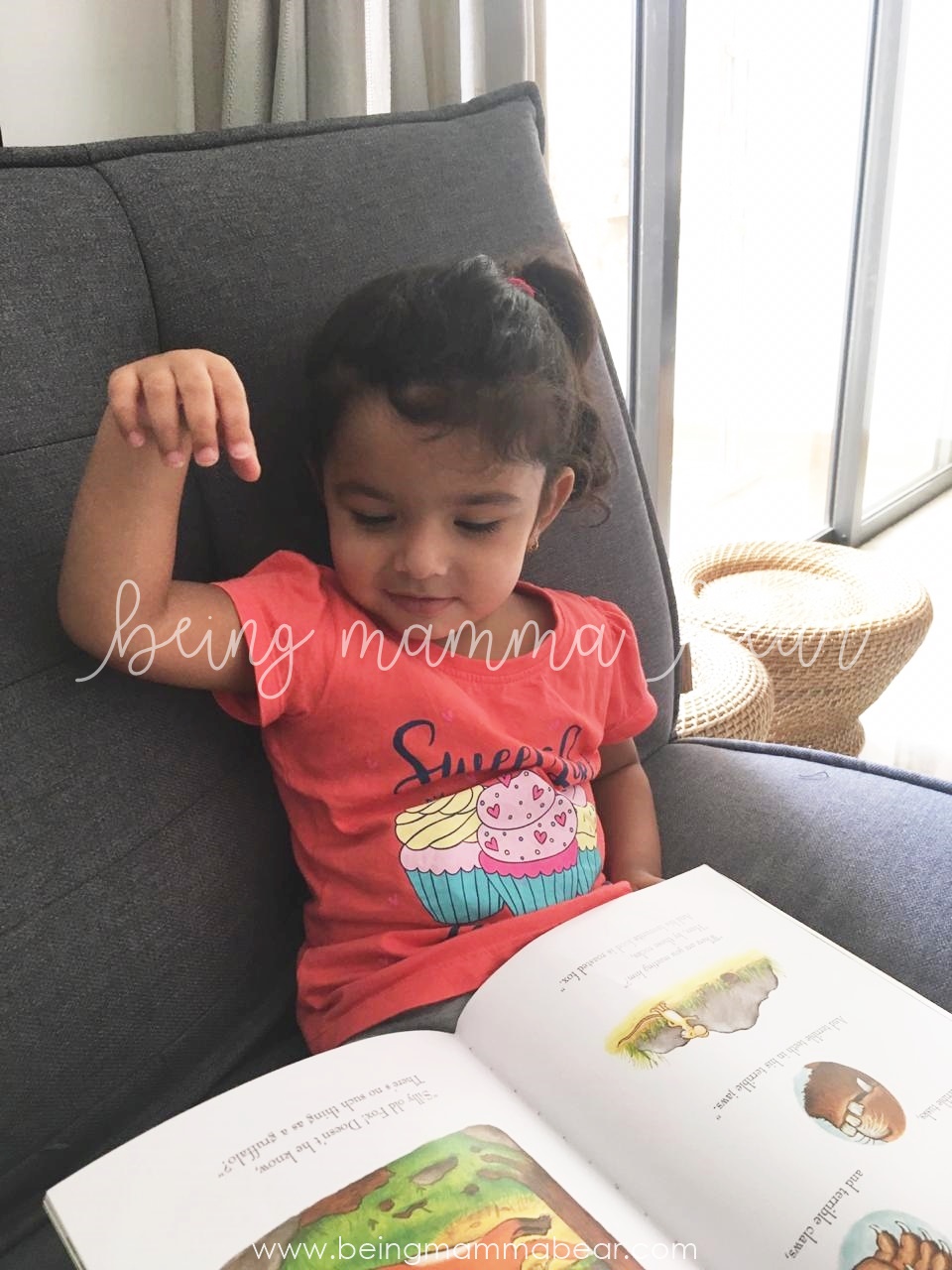 In the afternoon, I got such a weird headache that had me doze-off in the middle of the afternoon AFTER Laddoo woke up from her nap because I was just unable to keep my eyes open. I tried to give her other things to play with, but when she wouldn’t I turned on Peppa and lay down right there, on the couch. She decided that it would be cute to lay down on me and watch Peppa. After she’d poked me in ten different places, it wasn’t cute, not one bit.

And as fate would have it, only when I’m napping (which is rarer than once in a Blue Moon) will the phone ring twice, the doorbell once, and my child will get hungry twice, all in a span of thirty minutes. I mean, it’s as if the Universe knows I’m trying to relax but doesn’t want me to.

What’s worse is that for the past few days Laddoo has been napping only for an hour. It may be the reason for the headache because on this day, it was just 57 minutes, and there’s only so much one can accomplish in 57 minutes especially after it’s taken almost as long to get said child to bed. Should I rest, eat, work, or go to sleep next to her? To quote Chandler Bing, “It’s one of life’s many unanswerable questions.”*

I would have taken her downstairs to so she could blow some steam off but little miss was up since 6:30 AM and then again, since 12:30 PM. So we did some puzzles. Wait, that’s not right. Not SOME, we did ALL the puzzles.

She wasn’t as excited but I wanted to play. So I started doing the puzzles and she, little copy cat, joined me. So we opened every single puzzle game that we have and we solved them all. And then, we put them all back in their boxes, and stacked them neatly on top of one another. It was therapeutic. For both of us.

While we were solving the puzzles, she said, “Yeh waala bohot difficult hai.” I was stunned to hear her pronounce difficult correctly, and even though she used it to describe a fairly simple puzzle even for her, I was amazed that she used the word.

Then she said, “This is a pretend puzzle.” Actually, I don’t remember if said pretend puzzle or pretend something else, but I was equally amazed that she knew the word.

She didn’t sleep until 8:30 PM. I had a post planned on LORM for around 9/9:30, which, thankfully I was able to do, on time. But after that I was so tired that I barely had any energy to document the day. I knew I had to be up early since Laddoo was starting school the following day. I had a lot of preparation to do, so I turned in at around 11 PM. Now I know that’s not early, but it was early for me.

*Chandler says this to Erica in the final episode when he wonders what’s worse: giving birth or getting kicked in the nuts. It’s one of life’s many unanswerable questions that no one can know the answer to, because no one can experience both.