Oh my god! My baby goes to school now. I was looking forward to this day since March because hello, almost-crazy person here, and 50% of that craziness is thanks to being with a child all day, every day, for (just one day short of) 2 years and 9 months. Thankfully, I’m only ALMOST crazy, and yes, it could be worse.

Her school starts at 8 so I knew we were going to have to start the day early. In the interest of not running like a wild goose in the morning, I woke up around 5:30 AM, and while I had coffee, I set out her clothes, water bottle, bag, and shoes. What I also did was prep the letter board* – because, you know, priorities, and I didn’t want to miss a chance to document this milestone because I didn’t plan ahead.

And as soon as I finished, as if on cue, Laddoo woke up around 6:40 AM, before I could wake her up. We were off to a good start. I’d been telling her for the past few days that she’d be going to school so when I asked her in the morning where she was going, she knew it and was excited. When I asked her if she planned to have fun, she said she did. Did she plan to cry? She said no, with a big smile. Well, we were about to find out. (I’ll do another post on HOW I prepared her for school in the past month.)

My biggest concern on this day was to get her to poop before she went to school, because she’s not potty trained yet and I didn’t want some stranger cleaning her on the first day; as if being away from us and with new people wasn’t going to be hard enough for her.

When it was already 7:05 and she seemed to be nowhere close, I asked her to do utthak-bhaithak (squats) and within a minute we had a code brown situation. We all quickly got dressed and we had enough time for a mini photo session and still be a couple of minutes early for the 7:30 bus. 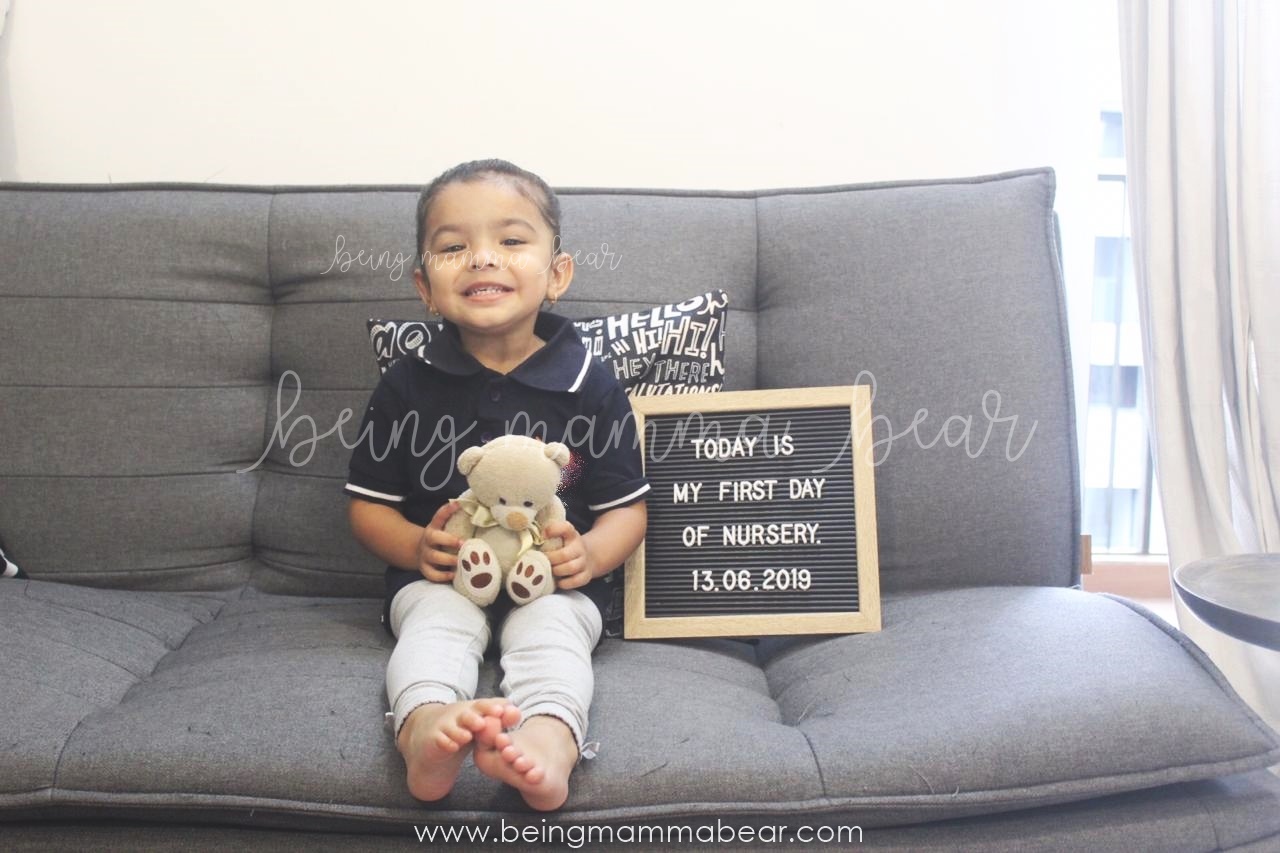 She didn’t fuss when I dressed her or did her hair and even cooperated for the photo session and smiled for the photos. And very enthusiastically, she wore her school bag and walked out the door with us.

The bus came and she happily got in. The husband and I followed the bus on our scooter. We wanted her to get used to the school bus but at the same time, we wanted to be there in case things got out of hand.

She was cheerful when she got off the bus and I heaved a sigh of relief. Someone from the school took all the little children inside the school building and when I said bye, she didn’t even look at me. Instead she sang, “If you’re happy and you know it clap your hands,” and went on inside. I burst out laughing. Sandeep thought I had gone crazy, which, I’ll admit, it would seem like I had. There were children bawling, and there I was, laughing out loud. When he told me to be quiet the second time, I had to remind him that it was my coping mechanism. He didn’t say anything after that.

Once all the kids we in, we asked at the reception if they needed us to stay. We were told we could go home. If there was some emergency, they would call us, but otherwise they would handle it. We still stayed for another ten minutes or so.

And within a few minutes we heard a LOT of crying. It was obvious that it wasn’t just one child. Poor babies. So many of them away from their parents probably for the first time.

“That one sounds like ours,” my husband said. “ No one else can screech that loud.”

And just as soon as I said that, the doors opened and out came a man holding my crying child in his arms. Well, she was TRYING to cry, wasn’t actually properly crying. I don’t know what she was doing, to be honest. Maybe she was trying to see what happens if she cried. So in a way, I was right. It didn’t SOUND like her, even though it was.

He saw us and knew we were the parents of the crying child. He reassured us and took her back inside. We waited for a few more minutes and when all seemed to be quiet, we realised there was no point in staying back and we could use this time more productively. 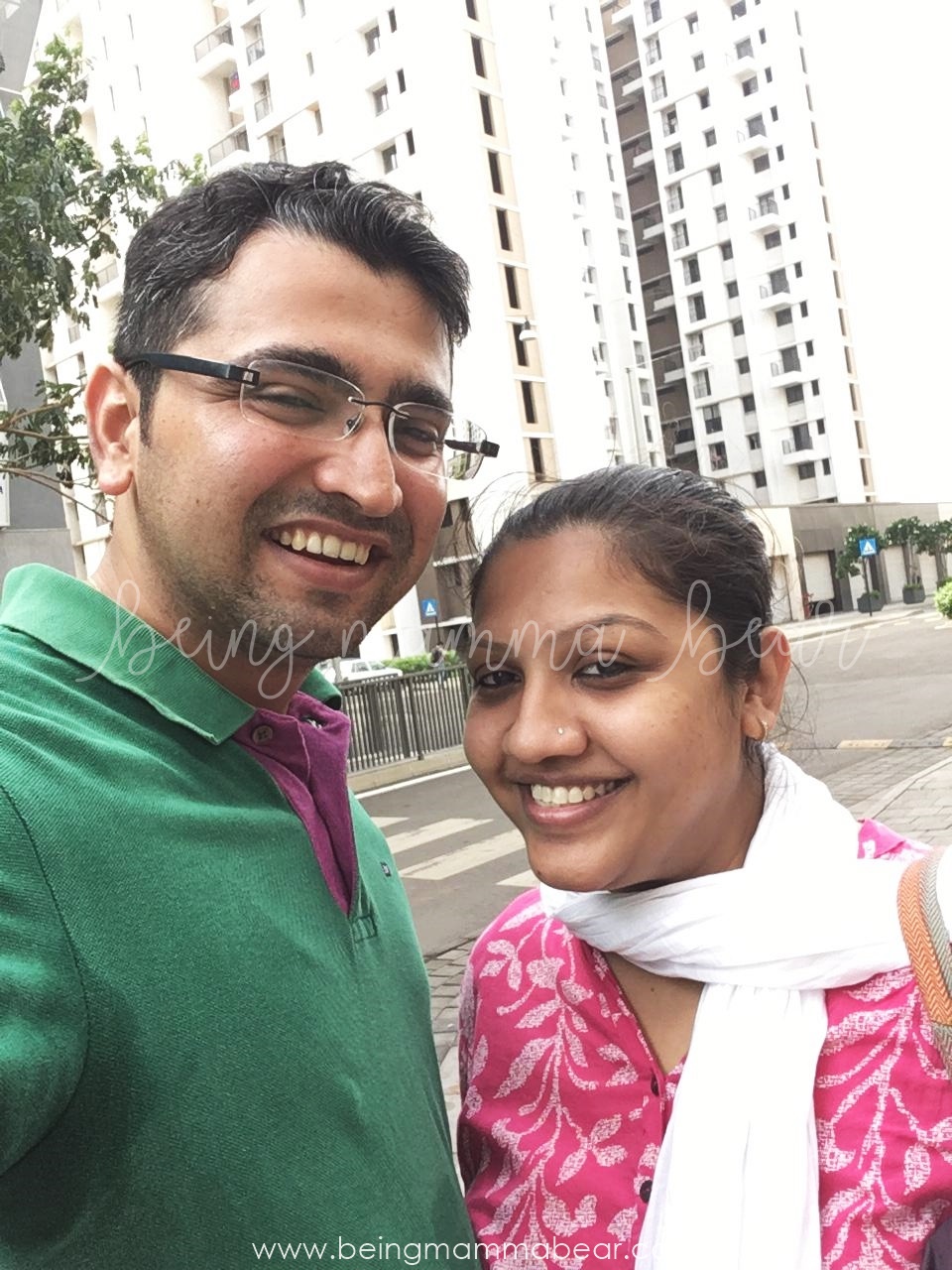 So we first went to the supermarket and purchased groceries. In peace.

Then we went to the club house and had breakfast. In peace.

Then we came back home and did laundry. In peace.

I then also prepped for lunch. Again, in peace.

And of course, it goes without saying – we reclaimed our bed, LOL. And yes, in peace.

We accomplished so much and we still had more than an hour to go.

My husband got ready to go to her school to make sure she got on the school bus fine, while I spoke to Disha @photostoriesbyd and an old friend from work. He followed the bus from school and I saw a happy child come back with a wand in her hand.

I have no clue what her involvement was in the making of the wand because it looked handmade. When I asked her, she didn’t tell me anything.

When I asked her what she did – no answer.

When I asked her what she ate – no answer.

When I asked her about her teacher – she said there was an ‘aunty.’

When I asked her about other babies and if she made any friends – no answer.

For all the random jibber-jabber she does during the day, now mostly coherent, she hasn’t told me a single thing about her first day.

“Did you have fun?” I finally asked her. It was a straightforward question. I figured I’d at least get an answer to that.

“Great. Will you go again tomorrow?” I asked hopefully.

Well, once she was back home getting her to nap was another task and despite being awake for 7 hours, she only napped for a little over an hour. I figured she would sleep early but didn’t. In the afternoon, I got a splitting headache again, and like the previous day, I took a nap right there on the couch while she watched Peppa. Later in the evening, she had her first taste of a PB&J sandwich and I have no clue what to make of her reaction, except that I should probably try again in a few days.

It was almost 9:15 PM by the time she closed her eyes and I was worried if she’d wake up on time the following day. And like always, she surprised us by waking up earlier that this day. But that’s for the next post.

Follow Being Mamma Bear on WordPress.com
Join 1,527 other subscribers