Her first day of school was great in terms of how well she took it. Except a few minutes of crying at the start of the day, and the huge mystery surrounding what she actually did, it seemed like we were off to a wonderful start.

But never have I ever felt sillier than when I found out I forgot to do something very important. Remember how after we dropped her off, we asked the school if they needed us to stay? Well, I also asked them if they needed anything more from us. I had packed her water bottle, and an extra diaper in the bag, other than some books the school had given us (I have no idea why she would need those but I sent them anyway), but THAT WAS IT.

And when the lady at the school said, “Just an extra set of clothes. And make sure you’ve labelled all her items with her name,” it hit me that I was so out of it that the most obvious thing had not occurred to me.

There wasn’t an extra set of clothes in her bag. And her bag, which looked like every other kid’s in that school, did not have her name on it. I had been such an idiot.

So on the morning of this day (her second day of school) I labelled the shit out of everything. And you know me, even though we bought a sheet of labels the previous morning, I took this opportunity to have some fun and practise my lettering skills. So I took out this Metallic Gold pen* that I have and wrote her name on her bag (front and back), water bottle (bottle and cap), and all of her books. And boy, did they all look beautiful. Maybe I was overcompensating for not remembering to do it in the first place, or maybe I would have done it this way even if I had. Either way, it was beautiful. 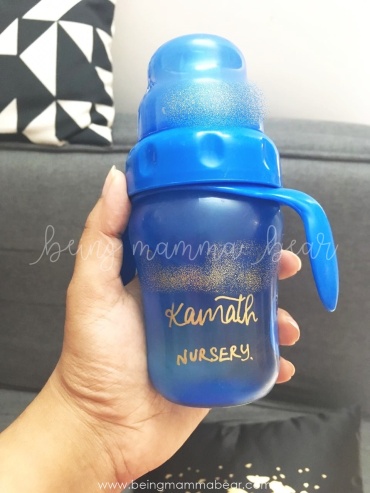 This day also threw all my previous knowledge about her sleep routine out the window. How does a child, who has been awake for 14 hours the previous day with just an hour of sleep in between, wake up at 6 AM after she went to bed at 9:30 PM? That’s less than 9 hours of sleep! And then survive the whole day without a nap. I mean… I can’t; I just can’t!

On the bright side though, we had a code brown situation immediately, without having to resort to exercise. Dressing her up, on the other hand, was slightly more difficult on this day because the school has a uniform and even though it was a fresh t-shirt, to her it looked like we were making her wear the same thing she wore the previous day. And now she knew where she was going. Fortunately, things went off well and I later found out that she made it to school (and back, if I may add) without any tears.

Whilst she was at school, doing God-knows-what because it still remains a mystery, I managed to have coffee and read a book. Then when our maid showed up, I moved some furniture around in the hopes of being able to keep the drying rack in the living room since it’s going to rain any day now (and so I’ve been saying for almost 2 weeks). But I realised that it looks horrible in the living room, so, for now, it is back in the balcony, but our living room is suddenly cleaner and a little more spacious. I did a few more chores but I mostly spent time trying to figure out what to do with my newfound freedom.

A couple of hours later, it was time for me to go pick her up and I received a happy child who seemed to have the dial of the bus conductor’s watch in her hands. By the time I found out that it was his, the bus had started to move away. I’ll know more about this on Monday.

The walk from the bus stop back to our building was most interesting for me. As I held her school bag, which she wasn’t interested in carrying even in the morning, she insisted on holding on to my finger. And though we didn’t speak much in those few minutes – I stopped trying to ask her questions when I didn’t get any answers – this little girl had a skip in her step all the way home, and I suddenly felt like I was walking a big girl home.

Once we were back upstairs, I gave her lunch, and tried to put her down for a nap. After a reading, each, of The Gruffalo* and The Paper Dolls* (these are available individually as well but we got this set of 10 Julia Donaldson Books* which has some of her best titles) when she still refused to sleep, it was starting to get on my nerves. I could either try some more and maybe she would have slept, but that would mean an extremely late bedtime, or I could let her play and she’d be asleep in another 5-6 hours max. So I gave up. See, quitting is not always bad. 😉

We then painted a little, and as usual, she started with painting on the paper and ended up colouring her hands orange.

Later, I had a headache again so I napped for a bit. In the evening I told my husband to get wine, because it had been a long afternoon. That is, if he came home at a decent hour. For the last few days, he had been coming home close to, and sometimes even after, midnight.

She did her puzzles and then had an extremely early dinner (5:45-ish) while she experimented with jumping off the crib (we have removed the bars on one side, so now it looks like a sofa bed. In short, safe to jump off), and was bathed and ready to go to bed at 6:20 PM. And after yet another reading of her top two favourite books (see above), she closed her eyes at 6:55 PM, while the sky was still bluish-orange, without any struggle.

The living room was a mess so I first cleaned up and then had a nice warm bath. I quickly whipped something up to eat and then started working on the blog post about her first day. Once I posted that, I watched an episode (or 2) of SATC, and finally put my phone away at 11:57 PM.

And there definitely wasn’t any wine. 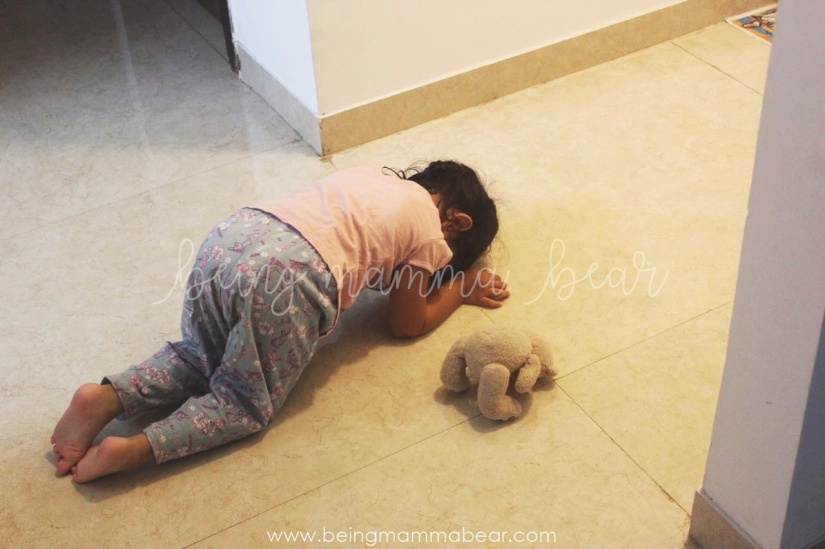 Links marked with an * are Amazon affiliate links. By making a purchase through these links, Amazon will pay me a small commission at no extra charge to you.