First of all, how is it the 10th day already? Granted that I am two days behind (when I actually wrote this, and as I post this, I am 9 days behind) but how are we already 10% into this countdown? Just how tired and out of my mind have I been to not notice this? But then again, how much do I REALLY notice, right?

It was Saturday and that meant no school, and again, for the second week in a row, it also meant no Papa. Thankfully, he didn’t leave at 7 AM because Laddoo was up by 6:15. He took Laddoo out for a stroll in the morning and that gave me a few moments to breathe. He even made Laddoo’s breakfast, so that was one less thing for me to be pissed off about on a Solo-parenting Saturday.

Miraculously, after her breakfast Laddoo got her box of Chicco Blocks* and started building something. But more than actually playing with the blocks, she sat on the box and asked me to take a picture of her. When I clicked a few from my phone, she pointed towards the camera and asked me to use that. I obliged. I mean, for someone who is obsessed with documenting everything, her child asking her to use a proper camera and actually posing for the picture has to be the best part of the day because she did this, not just once, but twice. 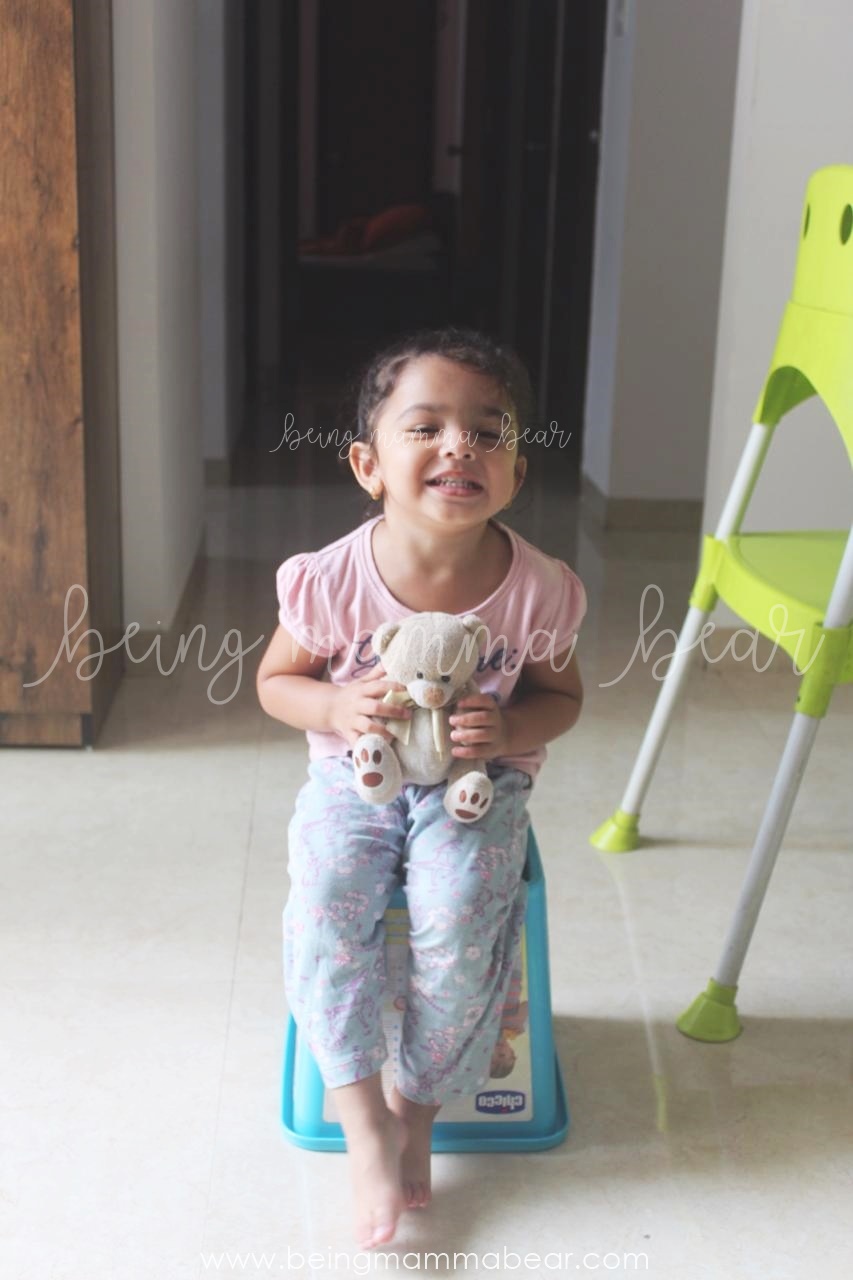 Also, have you noticed that Teddy Bear makes it to almost every picture these days? If I weren’t careful, she’d happily take him to school as well. In fact, on the first day, she almost did.

Teddy is also her favourite scapegoat; has been for over a month now.

Anyhow, after the photo session, she picked up my phone and using the Emergency feature got into my medical ID and called my mom (listed as an emergency contact) and had a nice chat with her for a few minutes. She’s done this twice now. 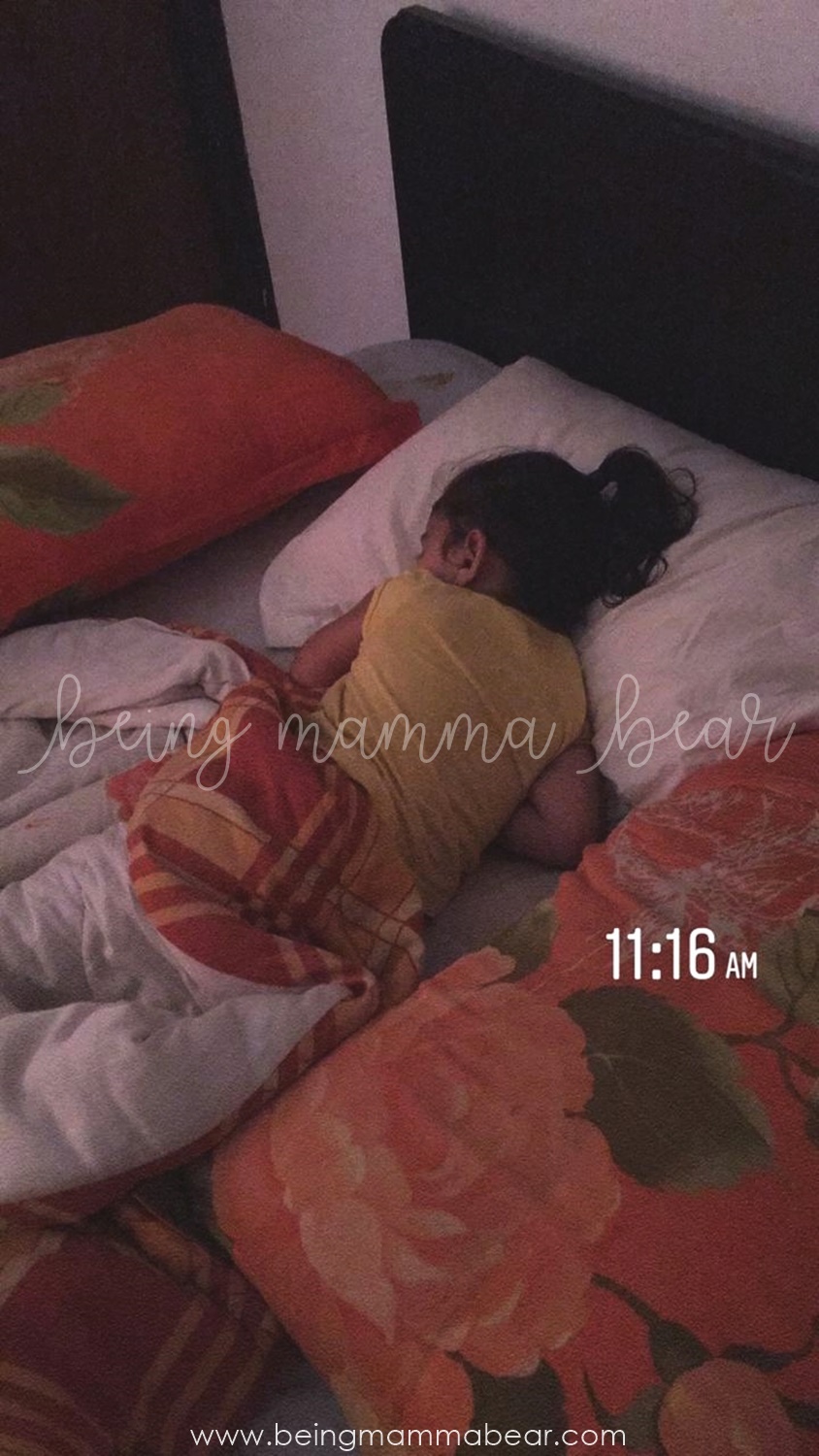 And finally, without much hassle, she took a nap and was asleep by 11:15 AM, and that tells me a little bit more about her no-nap situation on Friday. If she wakes up around 6, she’s ready to sleep in 5 hours – around 11-ish. But her school goes on till 11:30 and it’s almost noon by the time she’s back and by then, we’ve missed her nap window and not by a narrow margin because I can’t put her down at 12:15. She has to freshen up, eat something and then nap. And by then, it’s close to 1. No wonder she didn’t feel like napping. On Saturday, even though she slept for just an hour and 15 minutes, it was still a nap and a decent breather in an otherwise tiring day.

And so today (it’s 11:01 AM on Monday, June 17 as I write this) I am not going to try very hard. If she’s sleepy, she’ll sleep. Otherwise her day will end earlier than usual, which, in some ways, is better for everyone’s sanity.

After her nap, when we were doing puzzles, I noticed there was a beetle stuck upside down in the sliding window rails in our living room. When I realised it was alive, I carefully turned him and took him out using the ends of two paintbrushes. 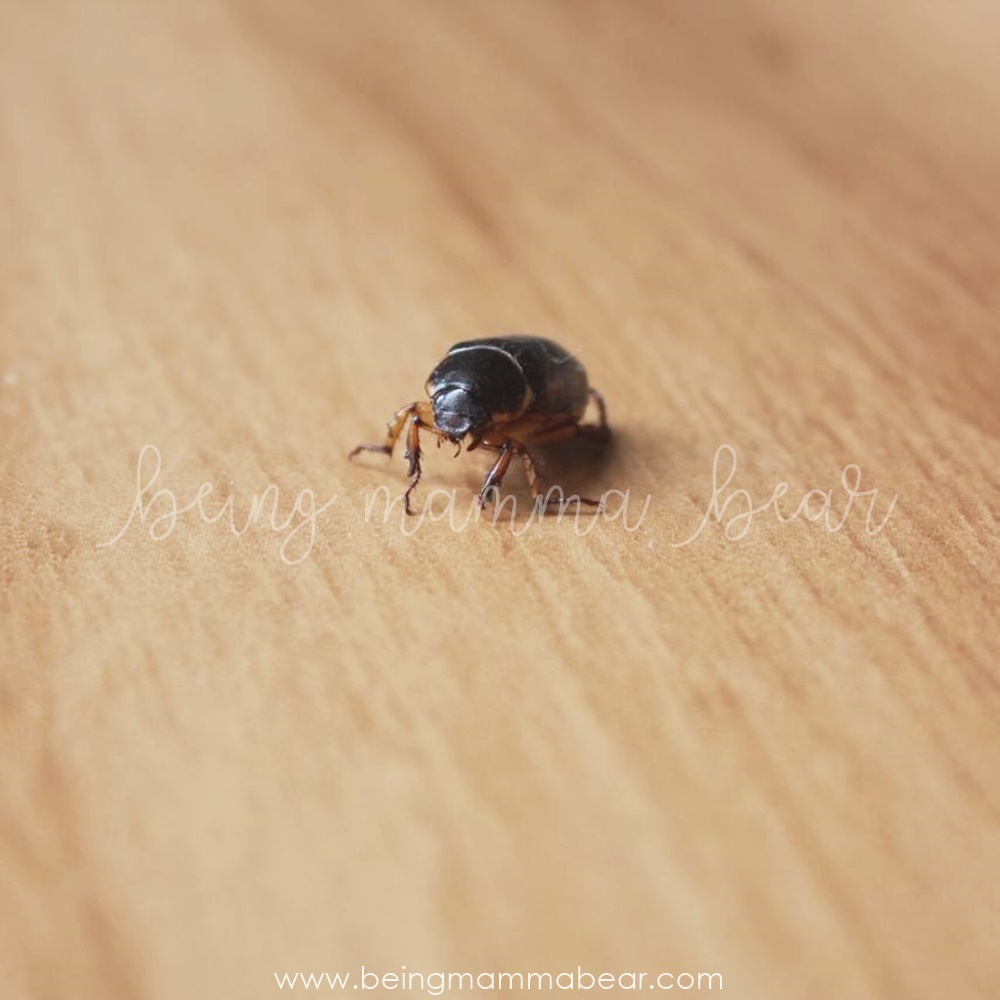 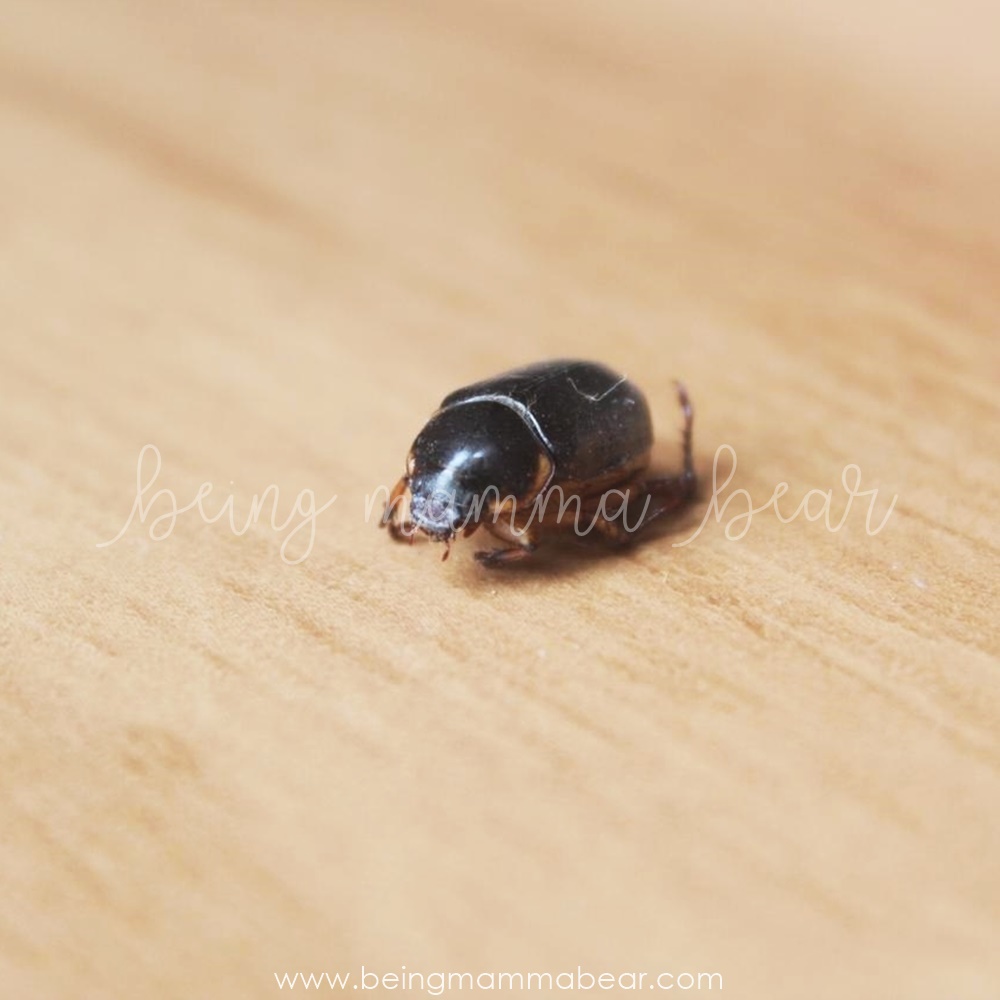 Laddoo was fascinated when she saw it. First she ran in and found the magnifying glass that came with her Intellikit box and tried to gaze at it through the glass. Then, she grabbed her bear to show him the beetle. 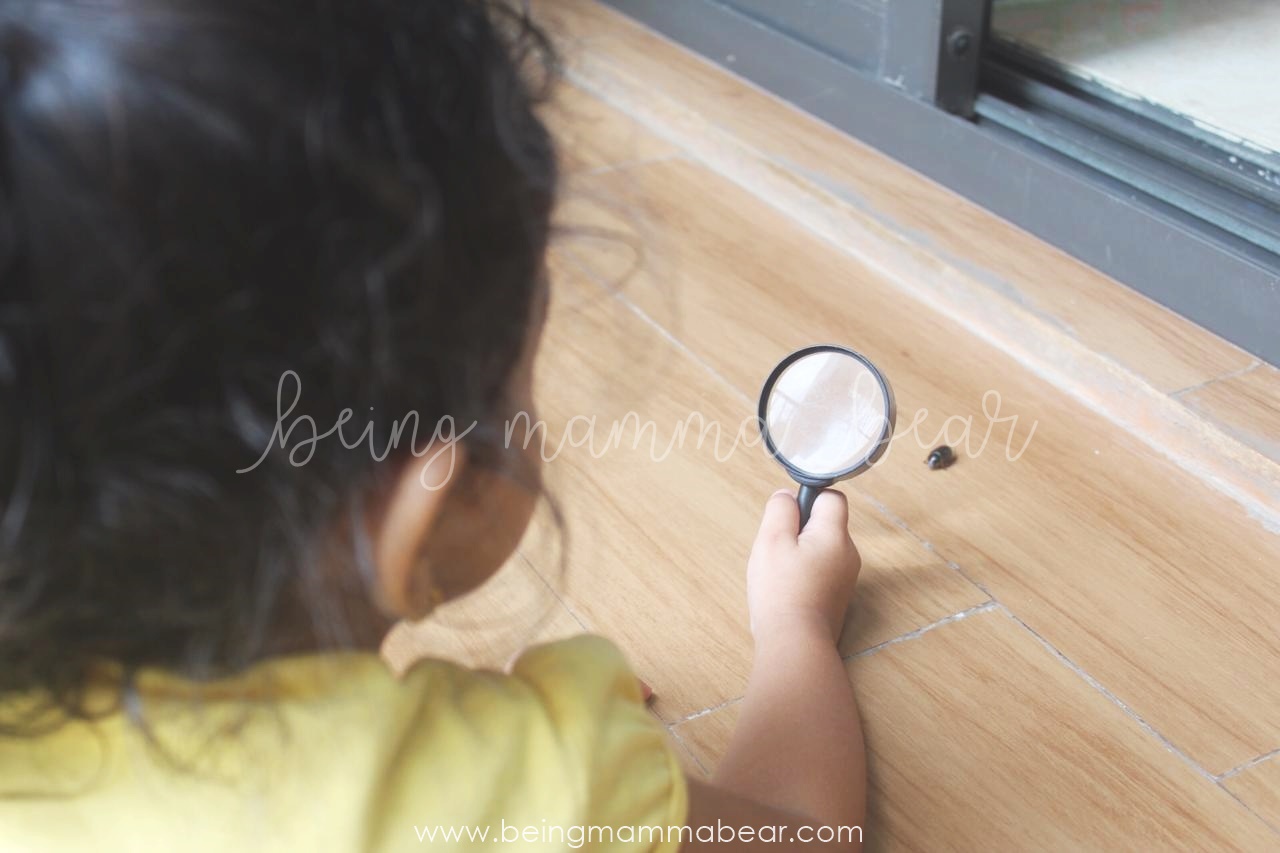 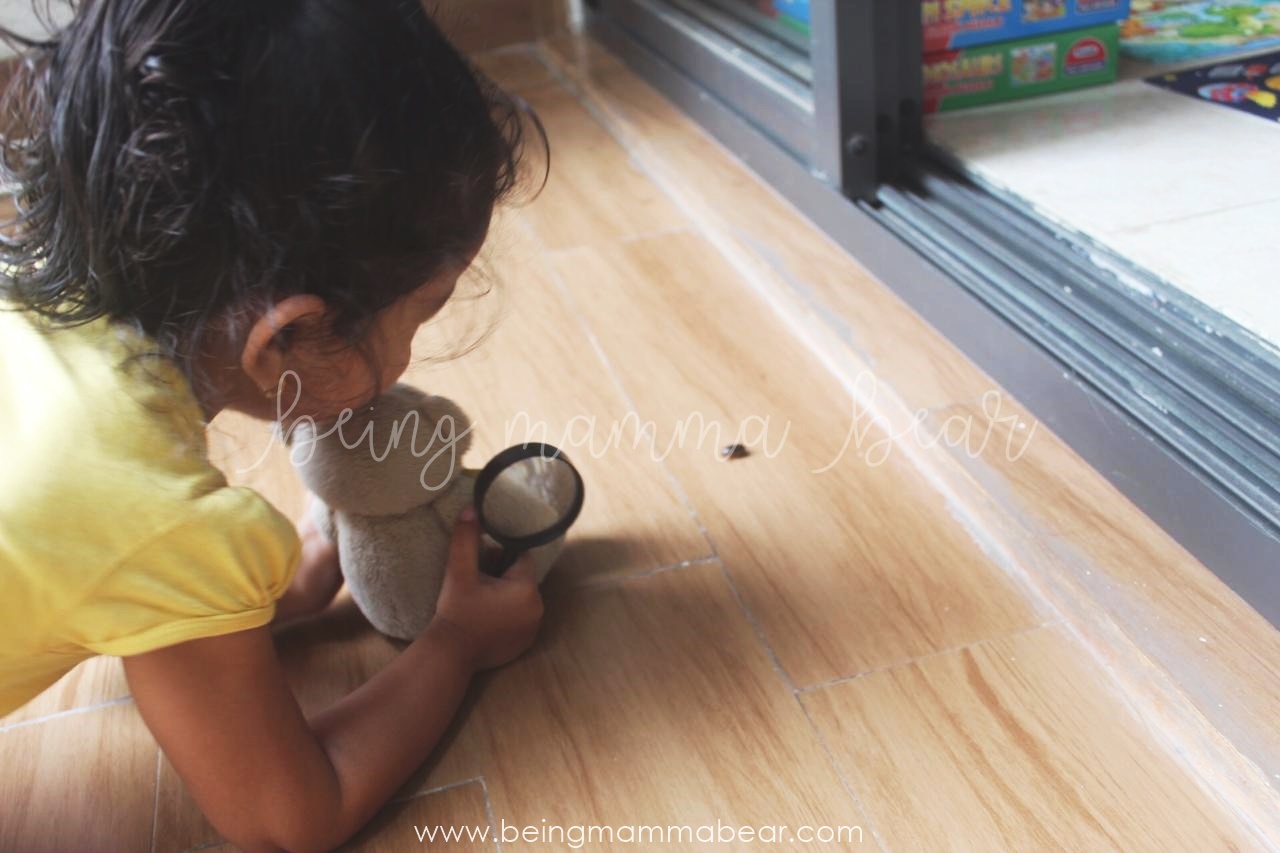 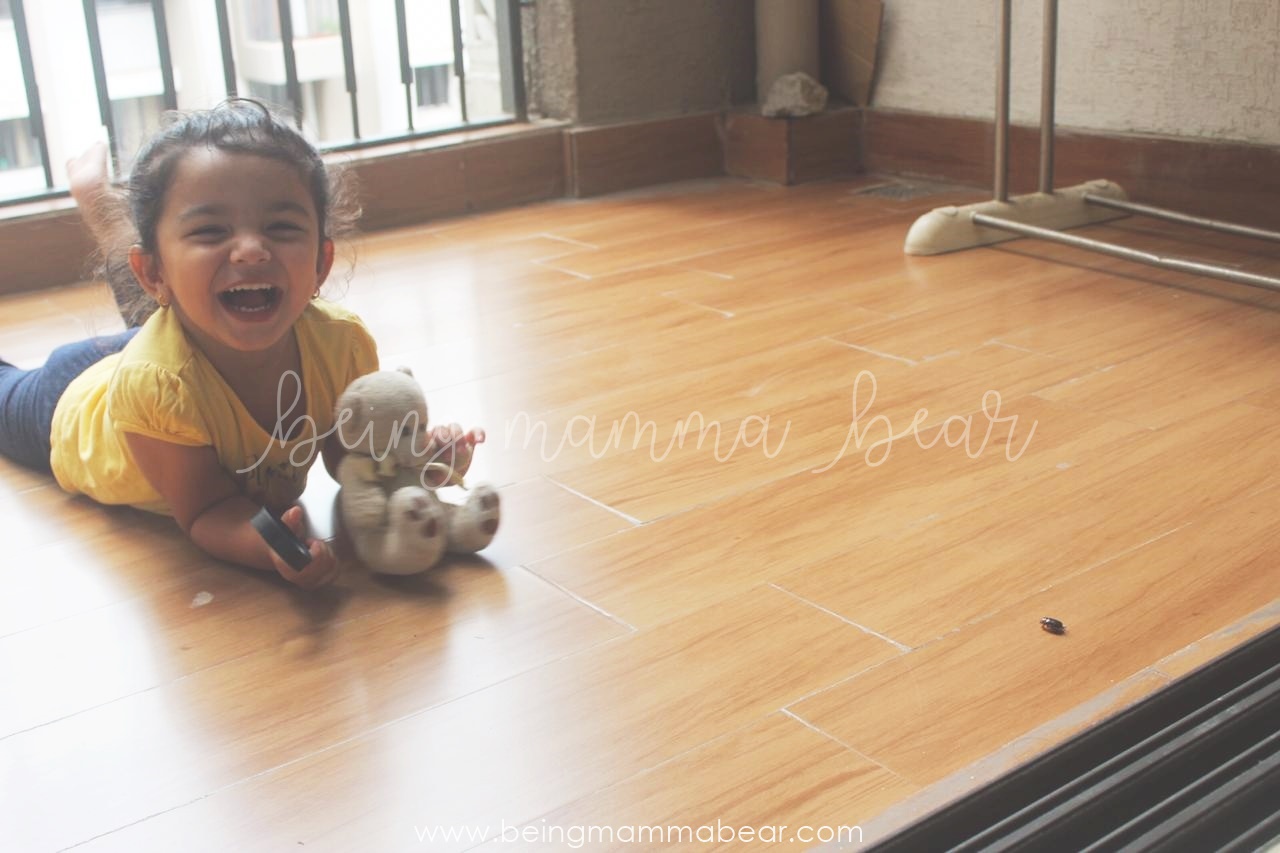 “Look, Teddy Bear. That’s a beetle,” she told him. And then gave me this amazing smile so I could take more pictures.

When I was done getting the pictures I wanted, she posed in front of the wall as asked me, for the second time that day, to take pictures of her. How could I say ‘no’? And why would I? And I clicked away. 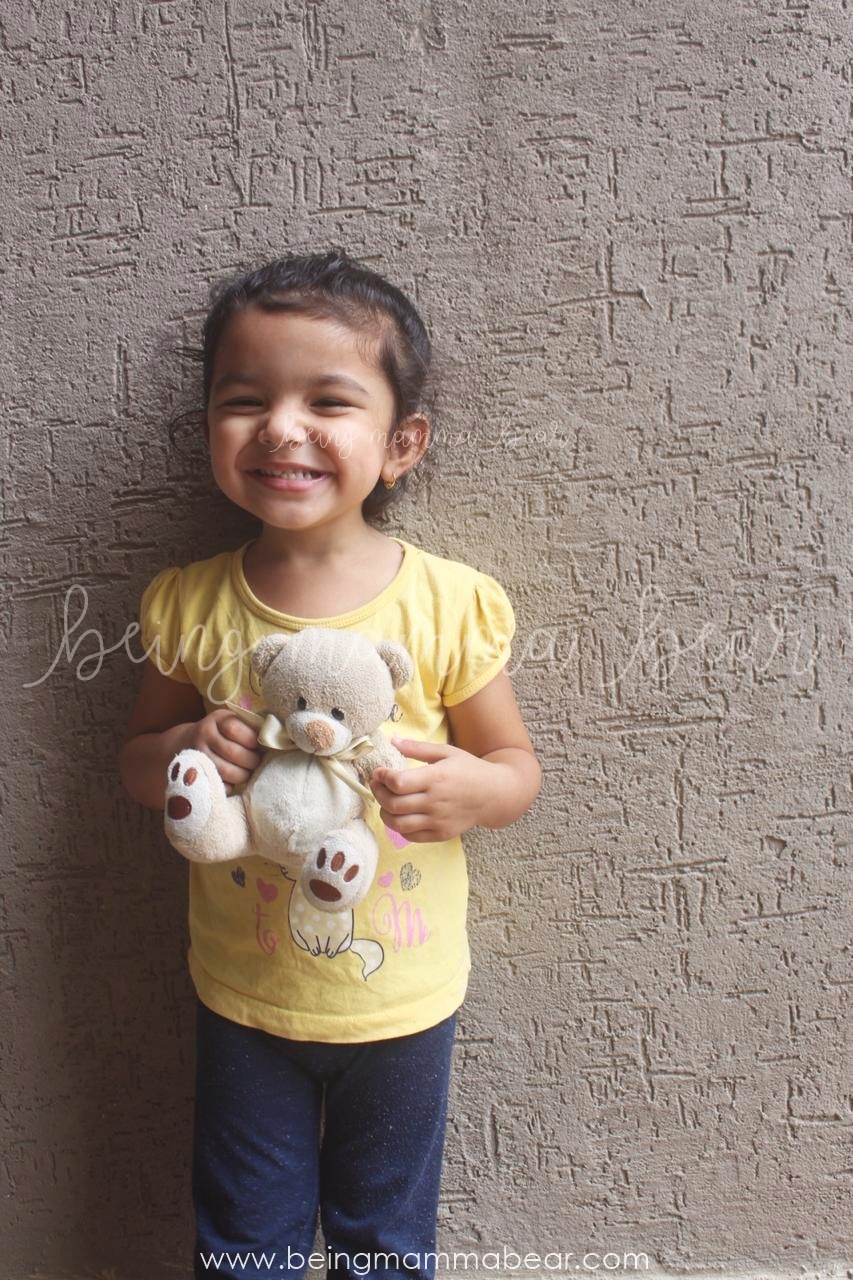 It was Christmas time again for her, and she happily decorated the tree for a few minutes. My day-time naps are becoming a regular thing now. I’m not sure how my headache comes on exactly between 2 and 4 PM, but it does.

We had yummy aaloo paranthas for lunch and later, she had Big One (Vita Marie biscuits) for snacks before some chocolate milk, and then, thankfully, at around 8:30 PM, she was asleep.

My husband was back by 9:30 but out date night began only at 11:30 because that’s when the food arrived. Until then I was working on the poster for Bookish Moms’ Anniversary edition.

But MY favourite part of the day was where I listened to music from the late 90s and early 2000s on full blast, on my earphones, obviously, until 3:30 AM.

I knew I wasn’t alone the next day. So why not make the most of it?

Links marked with an * are Amazon affiliate links. By making a purchase through these links, Amazon will pay me a small commission at no extra charge to you.