We went to the doctor hours after the pregnancy test showed a positive. But since I was only 4 weeks and 1 day along, the doctor suggested that we wait two more weeks to be able to see something clearly in the ultrasound.
During that first visit, she asked me if I was experiencing any morning sickness, weakness or soreness in breasts. I said ‘no’ to everything except the last one. At that time, I didn’t have any of the typical pregnancy symptoms and I thought to myself, Wow. This feels good. Boy, how wrong was I! Because what happened after that (and got better only by March end) is a story for another post; the next one, to be exact.

When the day finally arrived, I was super excited. I know my child was still an embryo and may not look like a human at all, but there was still a baby inside me. I was prepared to shed a few tears and be extremely emotional just like Rachel was when she saw her little baby. After all, this was my first time.
When we got to the hospital we were one of the first few ones there. We had an 8 AM appointment. My bladder was almost full and I was just hoping it wouldn’t take very long. I had had ultrasounds before for kidney stones, so I knew what was going to happen. But this was my first pregnancy ultrasound.
And I forgot we were in India.
You see, recently the government has had very strict regulations about not determining the sex of the foetus due to a high chance of abortion if the foetus is female. So now every time a pregnant lady has to have an ultrasound, there’s a fair bit of documentation procedure where the lady’s address and other details are filled in and she’s asked to sign a declaration that she doesn’t want to know the sex of her unborn child. These forms and then uploaded online (I don’t know how exactly, but there’s an online form too and the hospital staff takes care of filling that.)
This took another couple of minutes. Then the intern called me in to check if my bladder was full enough. When it was, we waited for the doctor. Now this wasn’t my OB-GYN. She was another doctor who only did ultrasounds, so I didn’t know her.
The first few minutes were uneventful. Gel was applied on my lower tummy and the doctor ran the probe over it.
“Yes, I can see the [amniotic] sac,” she said, and I was like, Of course you can. I AM pregnant, you know? But I stayed quiet.
The long document that I filled before the procedure started stated if I had any children already or if I’d had any miscarriage(s) in the past. I hadn’t. Clearly she hadn’t read the form because otherwise she would know that this was my first time looking at a ‘sac’ and she’d have to do a little more explaining than that even if she didn’t want to appear excited for me.
“It looks good, but let’s do a TVS. We’ll be able to see things more clearly,” the doctor said.
“Go empty your bladder and come back,” the intern added.
I understood that to mean that there was more and it made me happy because that couldn’t have been it.
Once I came back, I was given specific instructions on how to undress so that they could put an ultrasound machine inside me. Turns out, TVS stands for Transvaginal Ultrasound. I was asked to first lie down with a pillow under my lower back, cover myself up with a sheet (thank you for that), and then remove my leggings and underpants only from the right leg. Well, thank you for being so precise.
Now I know that I will have to forget about any shame, at least in front of doctors, by the time this baby comes out. But I was glad that they gave me a sheet to cover up
Moments later, I could feel something cold pushed down there. I decided to ignore that and look at the screen instead. And that’s when I saw something that was more than a dark circular shape on the screen.
“See, there’s your Bacchu*,” the doctor said and suddenly I felt a lot better. She didn’t say ‘baby’ because, well, we’re in India, but I was immensely thankful for the fact that she didn’t call it a foetus or embryo. She then cranked up the volume and we could hear a heartbeat – a nice steady sound.
Nope. Still no tears. What was wrong with me???
My husband looked at the screen and it was obvious he didn’t know what he was supposed to look at. I smiled at him, he smiled back. He knew I’d explain later.
I could see a little thing, something like a shrimp. The Bump App said that six-week old foetuses look like tadpoles, but somehow all I could think of, was it looked like a shrimp. Obviously it didn’t look human yet, but I could see tiny little limbs and it confirmed what I’d known for almost a month now – there was a baby growing inside me. 🙂 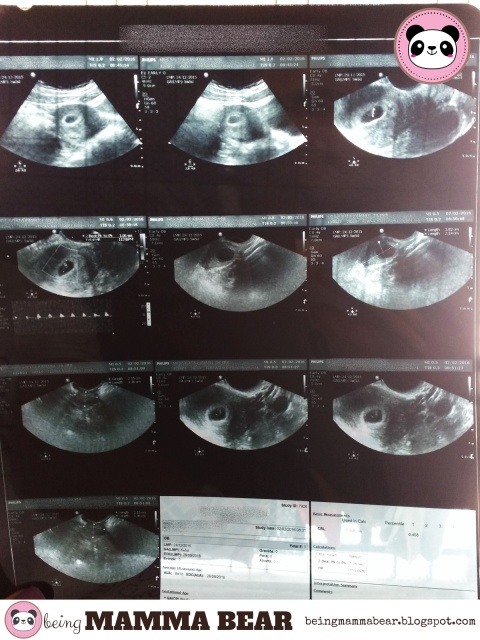 We asked the doctor if everything was fine and she said it was.
We got the images and the report only in the afternoon, so when I showed it to my parents, I said, “Look! There’s Shrimpy!” and my sister laughed!
The only sad part here is that the images are all on ONE sheet and they’re not printed on paper or photo paper. I can’t see each picture clearly because it’s a collage and each image is very small. Because I have to have light behind the image to see it clearly, I cannot scan it, I tried. The only way was to hold it up in sunlight and take a picture.
When I mentioned this to my OB she said you can ask them to give you the images on a disc. So I have my 20-week scan tomorrow. I’m going to go prepared with a pen drive so I can have a digital copy of the images. Just pray that the hospital says yes and doesn’t make me get hundreds of approvals just to get a picture of my baby.
That’s all I have for you now. I’ll be back Friday with another story.
See ya!
Love.

9 thoughts on “The first Look”

Follow Being Mamma Bear on WordPress.com
Join 1,526 other followers