It’s so strange for me to post Baby Updates here when I haven’t even written about the last EIGHT WEEKS of my pregnancy or about the birth. I blame my third-trimester tiredness and post-baby-lack-of-time respectively for that. Because I have my phone with me all the time, it was just easier to post on Instagram which is why you will notice that the length of my captions on each of the pictures started getting longer and standardised when it came to weekly updates.
But I am a blogger, and THIS BLOG exists. What use is it of if not updated regularly? So henceforth, the extra-long version of my Instagram captions will be posted here because that’s where the content belongs. Also, I really intend to post about how the rest of the pregnancy and the birth went (because I won’t be able to sleep peacefully if I don’t) but I can’t promise when that’ll happen.
Anyway, here’s what Week 16 of Baby’s life was all about.

Looks directly at the camera

For most of the pictures we took this week, she has looked right at the camera. We have yet to get her to smile in them when we say, ‘smile,’ but I’ll take this for now. For candid shots, I’d rather that not look at the camera and continue doing what she was doing, so it’s good that she doesn’t. But for planned photos like her weekly photos and other photos with people and/or milestone cards, it’s great to haver her look at the camera now. 😊 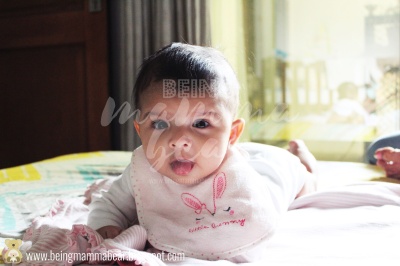 Plays with the toys hanging from the playmat and her chair

She has now also learnt to grab and hold the toys hanging on an arch on her bouncer. On the playmat though she just pushes them with her hands or feet. She hasn’t learnt to pull those as they are still a little far away.

I know this is totally self explanatory. A few weeks ago she started sucking on her fists but this is new. A couple of days ago I noticed that only her thumb was in her mouth. Also, it was her right hand. Is that an indication that she’s right-handed? Because I haven’t seen her put her left thumb in her mouth yet.

This week, she and I stepped out alone. Not just for a walk, not just to my mother’s house. We had to take a cab and it was an hour long drive. She was fine on the journey to the place. She looked outside the window and was chatty and playful. By the time we reached our destination, she was asleep. But on the way back she got a little cranky. Either way, I was able to handle it. So, yay! 🙌

This was baby’s first New Year, which is obvious considering she’s not even a year old. Like it is with her weekly and monthly milestones, I will take annual solo shots of her too. So weeks are with milestone cards, months are with balloons, her birthdays will have another prop (surprise 😉) and New Years will have….

Here’s a cute baby photo to start your day 😀😍 Our little doll all dressed up to take her first New Year’s Day photo. . See! She’s happy when I take her pictures. She was probably grumpy in the other picture because we covered most of the frame 😝😝 . And you want to know how I made her smile? I sang Old McDonald. That’s all it took! . Have a great day, you guys! 😘 . . . . . . . #newyear2017 #newyear #2017 #babysfirstnewyear #blogger #indianblogger #mommyblogger #mumbaimoms #indianmoms #parentblogger #motherhood #parenthood #newmom #newmommy #newparents #shared_joy #babymilestones #milestonecards #documentinglife #fortherecord #16weeksold #babiesofinstagram #instababies #kidsofinstagram #myBRUbaby
A photo posted by Mamma Bear | Nikita (@beingmammabear) on Jan 3, 2017 at 5:46pm PST

…Digits!
Also, This time we I started a new tradtion. Every year on New Year’s Day, we’ll take a family picture. Here’s ours from this year.

As you may have discovered by now, I have an obsession. I’m obsessed with memory keeping and making a grand event of simple things and taking hundreds (NOT an exaggeration) of photos. . So as it is with weekly and monthly shots of baby, I started a new tradition this year – family shots every New Year’s Day. Technically I should have started the year we got married, but this year’s just as fine. . But she was not impressed. Thankfully, her solo shots (coming up later today) came out well. She’s smiling in those (I’ll share my secret to that too) but by this time she was like, “Aren’t we done already 🙄.” . We had a great New Year’s Day. We slept and woke up early, had a lazy breakfast, took lots of pictures, went for a walk in the evening and then to meet my parents and grandparents! What did you do? 😀 . 🗓: January 1, 2017. . . . . . . #newyear2017 #newyear #2017 #familyphoto #family #ourlittlefamily #happyfamily #celebrations #babysfirstnewyear #blogger #indianblogger #mommyblogger #mumbaimoms #indianmoms #parentblogger #motherhood #parenthood #newmom #newmommy #newparents #shared_joy #babymilestones #milestonecards #documentinglife #fortherecord
A photo posted by Mamma Bear | Nikita (@beingmammabear) on Jan 2, 2017 at 9:16pm PST

During the week, I realised that she smiles when I sing Old McDonald. A couple of weeks ago, I used to get this reaction for a song that went, ‘I had a little turtle, his name was Tiny Tim,’ especially when the chorus went, ‘Bubble, bubble, bubble.’ I tested this theory during my New Year photo session (for her solo shots) and look at the results. By the time we got to our family photo, she was exhausted and cranky so we didn’t force her to smile or even be normal. We had plenty of great pictures of her alone and that was good enough.

So yesterday when my friend was visiting (more on that later) I asked her to sing. Turns out, it wasn’t the song. It was ME singing the song! And it’s not even just Old McDonald, it’s any song!! I love my little pumpkin! She likes listening to me sing. 💓💓💓

Plays with her feet

This week she also started pulling her feet towards herself. And she looks so cute when she does that. Pretty soon, her toes will be in her mouth.

Recognises me in a mirror/reflective surface

I don’t think she knows what a mirror is, but she smiles at me when I take her in front of a mirror and try to talk to her. Two days ago, she looked at me in the reflective glass on our window and smiled and I recorded that on video. Take a look…

Look who recognises my reflection!!! . The glasses on the windows in our house have a mirror-like finish. Yesterday afternoon, I looked at her in the glass and I can’t believe she responded. . Oh, and notice how chatty she’s gotten? I love it!! 😍❤ . 🗓: January 3, 2017. . . . . . . . . . #baby #babybear #growinguptoofast #16weeksold #babble #babiesofinstagram #kidsofinstagram #instababies #bloggers #indianblogger #mommyblogger #mumbaimoms #indianmoms #parentblogger #babymilestones #proudmama #mommylife #mamalife #momlife #mamabear #motherhood #parenthood #newmom #newmommy #newparents
A video posted by Mamma Bear | Nikita (@beingmammabear) on Jan 4, 2017 at 9:25am PST

Rolled Over again, and perfectly, this time

Two days ago, she rolled over again and perfectly this time. She was even able to release her hands from under her body. She’s tried that a couple of more times but hasn’t been able to pull her hands out from underneath. But now it happens more frequently, the rolling over. Time to put pillows on the side of the bed when we leave her alone even for a bit. Or better yet, put her on a mat on the floor.

We had another visitor this week – my friend from school whose wedding we attended a few weeks ago and also the nice lady who bought baby’s new white onesie that she wears in her weekly and monthly photos. Now Maasi is a term for aunt (mother’s sister) but I prefer Maasi to Aunty, so all my friends are going to be Maasi for baby. 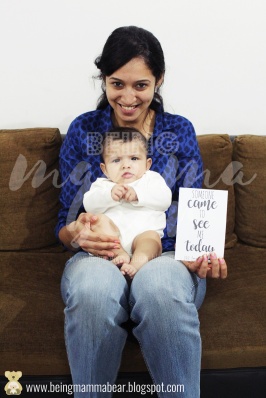 So after her wedding and all the hoopla surrounding it, she made it to meet us and Baby and Maasi had a good time 🙂

My husband and I, both, wear glasses. These days when we bring our faces close to hers to talk to or kiss her, she’s started pulling our glasses off our faces. Makes sense, though, because she’s now learned to use her hands to pull things.
That’s all for this week. I’ll see you all next week.